One way to become a saint 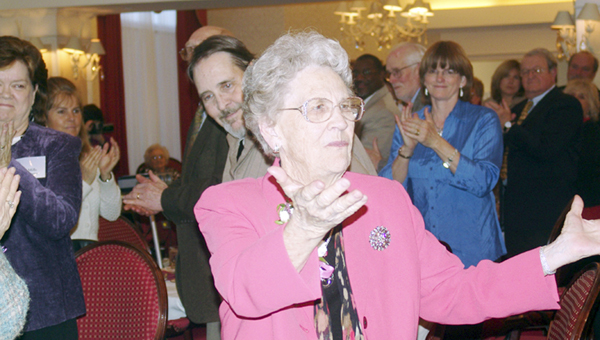 Eloise Thwing, who recently retired from Thermal Belt Outreach Ministry, which she helped found 20 years ago, stands with her arms outstretched to the approximately 250 people who attended a Valentine High Tea Party in her honor on Sunday, Feb. 13. (photo by Leah Justice)

Eloise Thwing honored for 20 years of service
Mother Teresa once said, “When a poor person dies of hunger, it has not happened because God did not take care of him or her. It has happened because neither you nor I wanted to give that person what he or she needed.”
Polk County’s “Mother Eloise Thwing” has given people what they needed and then some.
Thwing, who helped organize Thermal Belt Outreach Ministry (TBOM) 20 years ago and recently retired, was honored at a “Valentine High Tea” held at Tryon Estates Sunday, Feb. 13. About 250 of Thwing’s friends, colleagues and TBOM supporters attended.
Thwing worked tirelessly for many years as TBOM’s executive director to help the organization flourish.
The Polk County Board of Commissioners joined in the praise, declaring Sunday, Feb. 13, 2011, as “Eloise Thwing Day in Polk County.”
“I’m overwhelmed,” Thwing said during the tea party. “We could have never moved ahead without your support and it hasn’t been me. It’s been you, the community, that has made it possible for Thermal Belt Outreach Ministry to accomplish what it has accomplished.”
Thwing stood with her arms outstretched to the hundreds who attended in her honor during one of several standing ovations.
“I am very satisfied in my retirement to know that you will always provide for those in need,” Thwing said. “I thank you from the bottom of my heart. I’m the one who has had the privilege of working with you. Thank you so much, so very much.”
The tea party included food, raffled gift baskets, music, a presentation on TBOM’s history and speeches.
Rev. Tony Sayer was one of the first to help Thwing start TBOM; he provided a space in the Columbus United Methodist Church and donated utility costs. Sayer talked about Thwing’s background and said her paths made her a saint. 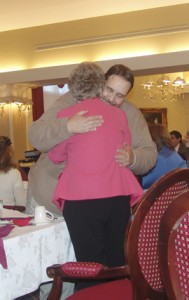 “Someone wiser than I once said that there must be as many ways to become a saint as there are saints,” said Sayer. “Here is one way to become a saint.”
He said Thwing’s path began in Miami, Fla., where she was raised in a loving home by her parents, Gordon and Frances Thompson, who were also thoughtful, decent and hard working people. Thwing grew up in the Methodist Church and entered the University of Miami Jackson Memorial Hospital School of Nursing to become a nurse, spending several years helping people every day, “when their bodies and spirits are most vulnerable,” Sayer said.
“[Thwing] learn[ed] how to care, not as a sentimental feeling, but as an intentional and disciplined practice,” Sayer told the audience.
Sayer said Thwing met and fell in love with a mechanical engineer whose career after their marriage took them to Long Island, N.Y.
After her husband’s retirement, the Thwings took a friend’s advice and moved to Columbus, where they joined the Columbus United Methodist Church. She became involved in United Methodist Women, in Church Women United and the larger community, where she saw great needs.
“[She began] to see, along with all the good things about Polk County, another side to life here,” Sayer said. “[She saw] that many families are struggling to get by and living in inadequate and unsafe housing. [She saw] that each night many of our community’s children go to bed hungry. [She saw] ignorance and underemployment. [She saw] that terrible poverty coexists alongside great wealth.
“Compassion consists first in seeing. This act of seeing the poverty around you, of seeing what so many other people genuinely do not see, or pretend not to see, or would prefer not to see, is a part of what it means to become a saint.”
So is resolving to do something about it, Sayer said, and Church Women United gave Thwing the opportunity.
While Thwing tried to figure out how to address the problems, her husband fell ill and after 47 years of marriage, he died.
“Shortly before his death he [asked] whether [Thwing would] stay or leave after [he was] gone,” Sayer said. “[She told] him [she would] move up to Vermont to be close to [her] son. ‘Don’t go,’ [her husband said. ‘Eloise, your heart is here, in this place, in what you’re doing. Stay and see it through.’
“These words [were] among his last gifts to Eloise. They [were] his last great gift to Polk County,” said Sayer.
And so Thwing stayed and shortly after TBOM was born.
TBOM began in 1991 with Thwing as its board chair in a room at the Columbus United Methodist Church. The organization was run with volunteers and one part-time employee. Thwing was later appointed executive director after the first director moved away.
By 1992, the organization had become a 501(c)(3) non-profit and operated on a $14,000 budget provided by donations. TBOM gave out mostly food, but began seeing that people also had great needs for rent, utility bills, prescriptions, heating and cooling costs, gas for work and medical appointments.
This was when Thwing set out to receive help from other local organizations to provide financial assistance to those in need. Several programs emerged and grants were obtained. On June 8, 1998, TBOM moved into its new building, located on White Drive in Columbus.
Since then, TBOM has continued to grow and with Thwing’s help, Ashley Meadows affordable housing was built, the Collins Dental Center for children was built and critical programs such as the Feed-A-Kid backpack program were established. TBOM also acquired more land adjacent to the main building to further expand needed services.
In its 20 years of service, TBOM has assisted 78,927 individuals from 29,777 households.
“This is a part of how you become a saint,” Sayer told Thwing. “When people tell you that something is impossible, you simply ignore them. When someone tells you no, you just don’t accept it. You act as though they have told you yes, until they finally give up and do say yes. Thus we learn that being a saint involves not only deep compassion but also – let it be said – monumental stubbornness.”
Sayer said what is more basic to becoming a saint is doing something that is not in itself extraordinary, “but doing it over and over again, day after day, for 20 years,” he said, “treating people in need with kindness and with dignity, never giving up on them, and letting them know, even in the midst of distress and hardship, that there is always hope.”
Sayer suggested the example Thwing has given offers some necessary wisdom.
“I know you join me in thanking God for Eloise,” said Sayer. “I thank God that Eloise came to Polk County and found herself at home here.”
“Offering our own gifts in service to others is really our best way to honor Eloise… May each of us, like Eloise, find our own way of becoming a saint.”

Tips for our northern friends Life on the Farm

Chamber could take on travel and tourism