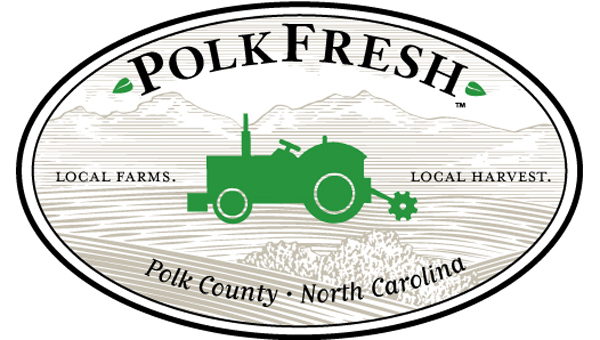 The new PolkFresh logo, which will be used on bags, shirts, stickers, advertisements and more.

Creamy casseroles and freshly baked breads graced the table.
Booths and tents to sell produce and jams occupied minds.
An assembly of more than 60 vendors congregated at the Polk County 4-H Center Feb. 10 to discuss plans for this year’s farmers markets in Columbus, Tryon  and Green Creek.
Saluda also has a farmers market, but it is not operated by the same group that runs the Columbus, Tryon and Green Creek markets.
Led by Lynn Spraque, the group came to a consensus about two key points in particular. 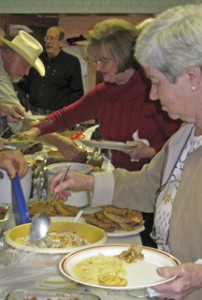 The first is that booth spaces will be restricted to farmers who live or grow crops in Polk County. The one exception to this rule would be if a farmer from outside the county could provide an item of produce that no Polk County farmer could provide.
Spraque said, for example, if no Polk County farmer had apples in October, he would then use his discretion to allow an outside farmer to sell them.
“If we’re going to keep it a Polk County fresh market, it needs to be Polk County farmers,” said local farmer Jeff Searcy.
Searcy said in years past, he’s seen issues with vendors coming in from outside the county to sell. He said one in particular was even undercutting the other farmers’ prices.
Farmers agreed they would also prohibit anyone from buying produce from somewhere else and reselling it at the market.
Sprague said about 110 vendors sell their wares at the three markets throughout the season.
Vendors also agreed to an increase in vendor fees for the year.
In the past, vendors could get a booth all season for $25. Now, vendors, including regular participants, must pay $40 for a yearlong booth at any one market. If a vendor chooses to be involved in both the Tryon and Columbus markets, they will have to pay $40 for each. Sprague said those vendors who are regulars would have access to their same site from the year before, so long as they pay the $40 vendor fee before the open of the season, which will be April 9.
“We want to do that so everybody knows where Lewis Williams the sunflower man is, for example,” Sprague said.
Vendors who choose to come sporadically must pay $5 each Saturday they attend. Once a vendor has participated three Saturdays (contributing $15 in vendor fees) they must pay the full season amount–$40–for participating on the fourth Saturday and beyond. The $15 they have already paid will be counted toward the $40 fee.
A $5 tent rental fee will also be charged if vendors need a tent for the day.
“You start charging much more than $5 and you’ve got people who aren’t making any money,” Spraque said. “You sure don’t want someone going home losing money.”
Sprague said he’s amazed at the growth the markets have seen.
“We have just hit the ground running,” Sprague said. “Where we’re headed? As it gets bigger, I hope each will eventually have its own market manager.”
Raising vendor fees for the season allows Sprague, his Americorp members and Carol Lynn Jackson to assist farmers by marketing the quality of fresh food from Polk County farms to Polk County residents and beyond.
Part of the marketing effort includes a new logo to be used on bags, shirts, stickers, advertisements and more.
“We wanted to tie everything together,” Sprague said. “The former logo didn’t lend itself to all the uses we had in mind. The former logo also had a sprig of wheat in it and we don’t grow a lot of wheat, so we wanted it to more accurately depict our farmers and the work we’re doing.”

Around the region: Spartanburg mourns passing of Beacon founder