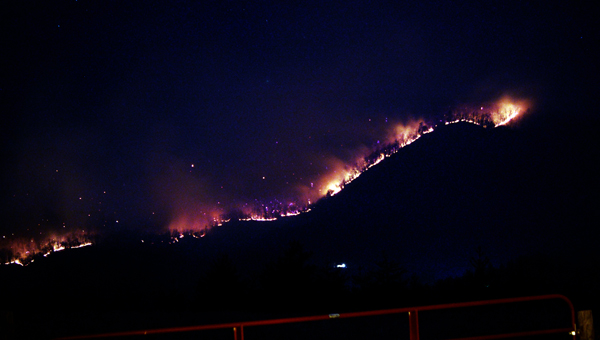 A photo taken Monday night, Feb. 14, of the World’s Edge fire. The fire was thought to be under control Monday afternoon, but wind gusts late in the day caused it to jump two of the firefighters’ back burn lines. (photo by Rob McComas)

What began as a 5-acre fire could end up burning more than 600 acres of forest in Polk and Rutherford counties by the time it burns out.
Firefighters have spent the past four days fighting the fire, which was thought to be under control Monday afternoon before high wind gusts fanned the flames.
Firefighters were called to the Judes Gap area Saturday, Feb. 12 around 4 p.m. Crews have worked the fire 24 hours a day since then, with multiple agencies working the tough terrain, including the lead agency, the N.C. Forest Service, the N.C. Parks Service and the fire departments of Sunny View, Mill Spring, Edneyville and Lake Lure, among others.
Other agencies have also assisted, including the Polk County Rescue Squad, which has shuttled firefighters into rough terrain with four-wheel drive ATVs. Saluda Fire and Rescue was called in for assistance with equipment and personnel yesterday morning.
No structures were in danger as of Tuesday afternoon, although the fire could be seen within a half mile of some homes. By Monday evening, the fire on the ridgeline between Polk and Rutherford counties could be seen by Rutherford County residents.
A spokesman with the N.C. Forest Service said by Tuesday the fire had burned about 300 acres. The blaze broke over containment lines Monday and was carving its way down the border between Polk and Rutherford counties.
Fire crews have had difficulty reaching the fire because of the rugged and steep terrain. In an attempt to contain the fire, they have created back burn lines. A back burn is where firefighters burn sections surrounding the fire, so once the fire gets to the already burned area it has nothing left to burn and dies out.
On Monday, gusts of wind fueled the World’s Edge fire, causing it to jump two of those back burn lines.
“We’ve had to back up and put in more control lines,” said David Brown, a fire information officer with the N.C. Forest Service, “and right now it looks like the fire will at least double in its current size by the time we get it contained.”
Firefighters from Sunny View and Lake Lure fire departments were helping yesterday with structure protection in the area near Cooper’s Gap Road and Girl Scout Camp Road, off Highway 9 in the Sunny View community. Much of the fire yesterday had moved into the Chimney Rock Park area, with some of the fire also burning private land.
Sunny View Fire Chief Marty McGuinn and Dan Loudermelt, N.C. Forest Service director for Polk County, were both unavailable for comment yesterday because they were working the scene. Tryon Fire Chief Joey Davis said winds Monday afternoon apparently caused the fire to jump containment lines twice and assistance was called from surrounding agencies around 8 a.m.Tuesday to help with structural protection.
Davis said McGuinn’s Sunny View crew is wearing down, having worked all day and night in shifts since Saturday. Predictions were that firefighters would have to continue fighting the fire at least all day yesterday and into today.
Officials said state forest service personnel from the eastern portion of North Carolina were expected to arrive sometime Wednesday, Feb. 16 to relieve the current crews.
Several counties surrounding Polk, including Henderson County have moved into red flag warnings for burning. A red flag is not a burning ban, but residents who choose to burn outdoors will be held responsible for any damage.
Firefighters across the Carolinas are working a few forest fires, including one that had burned approximately 100 acres in Surry County as of Tuesday afternoon, Feb. 15. Forest fires can be common this time of year and into the spring because of high winds and dry conditions.
The World’s Edge fire will likely exceed the acreage damaged by a fire in 2006 between Tryon and Saluda off U.S. 176, which burned an estimated 400 to 500 acres.
Another fire at World’s Edge occurred in April 2006 and burned approximately 330 acres. The World’s Edge fire in 2006 was caused by fireworks.
The current World’s Edge fire is still under investigation.