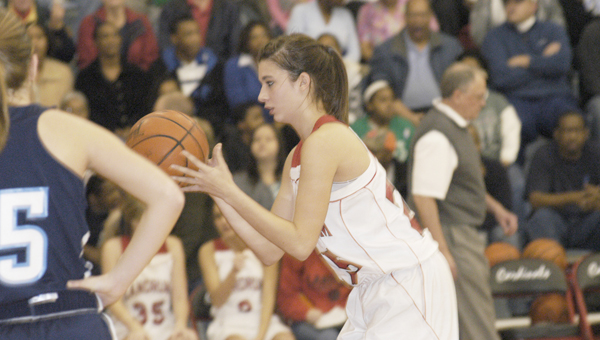 It was a fight to the finish for the Landrum girls’ basketball team against Christ Church on Thursday night, Feb. 10. The Lady Cardinals pulled away for a 42-35 victory, but the victory had its cost.
With just over two minutes to play, Landrum leading scorer and team leader Jordan Jenkins streaked down court and injured her knee defending a fast break. The senior had owned the paint all night, tallying 11 points before the injury.
Christ Church had the momentum and now Landrum lost its team leader. It looked bleak for the Lady Cardinals.
But it didn’t turn out that way. With Jenkins out, Skylar Henderson and Amber Whiteside took over.
Henderson hit two clutch free throws with 1:25 left in the fourth quarter to put Landrum up 37-35. On the next possession, Henderson grabbed a defensive rebound and was fouled. She quickly knocked down two more free throws.
“I knew I had to do something to help my team,” she said. “I just knew I had to make ‘em because we really needed it.”
In the waning seconds of the game, Whiteside hit 3-for-6 from the charity strike to ice the game for the Lady Cardinals. After Jenkins left the game, the Lady Cavaliers didn’t score another bucket.
“When J.J. (Jenkins) went down, they just wanted to win it for her,” head coach Roy Parton said.