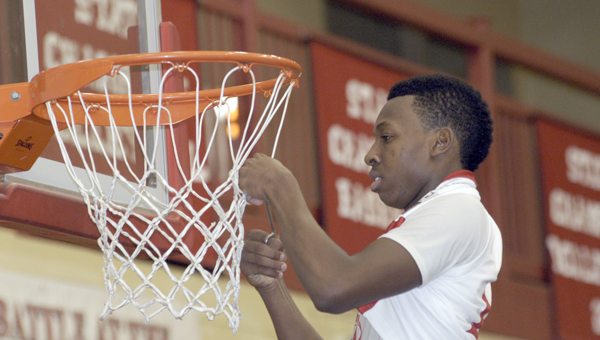 Landrum’s Austin Brown cuts down the net after the Cardinals beat Christ Church, 52-49, for the Region II-A Championship on Thursday, Feb. 10. (photo by Joey Millwood)

The Landrum men’s basketball team beat Christ Church for the Region II-A Championship 52-49 on Thursday night, Feb. 10, but it wasn’t without drama.
“They made us earn it,” Landrum head coach Lyn Smith said.
With just over five minutes left in the fourth quarter, the Cardinals were up 36-29. The Cavaliers came back and took a 42-40 lead with 1:10 left in the period. Landrum’s Austin Brown took off down the court seconds later and tied the game back up at 42-42. With 3.5 seconds left, Smith called a timeout. Coming out of the timeout, the Cardinals got a good inbound pass to Truston Whiteside, whose shot came up just short.
As his team huddled around him just before overtime, Smith had one message to his team.
“I told them to get their heads up,” he said. “We’ve got four more minutes of basketball.”
That message registered.
The Cardinals were led by center Alex Bryant in overtime. The big man tossed a touch pass to Tyler Logan as he darted down the lane for an easy layup. On the next possession, Bryant disrupted a Cavalier pass that resulted in a basket for Whiteside on the other end of the court. Two possessions later, Bryant put the Cardinals up 48-42 with 1:34 left in the game.
“We talked to him at halftime about owning the lane,” Smith said.
Bryant heard the message loud and clear and knew what he had to do in overtime.
“I just needed to score and play defense,” he said. Bryant finished the game with eight points.
Another bonus for the Cardinals was the return of their leading scorer Whiteside. In his first full game back, the sophomore played with a still-fractured wrist and led Landrum with 12 points.
“I didn’t know if my wrist would hold up,” he said. “It held up and we’re region champs.”
“It was good (to have him back),” Smith said. “He means a lot to this team. It meant a lot that he was able to play with a fractured wrist taped up.”
Whiteside was one of four Cardinals to score in double-digits. Logan and Cole McDowell scored 11 points. Brown added 10 points.
For Smith, this was his third region championship in six years as the Landrum coach.
“It feels great (to win it again),” he said. “This is a very, very young team. We graduate three seniors so I expect good things to come for Landrum basketball.”
The Cardinals will be at home on Tuesday night, Feb. 15.
Editor’s note: The Lady Cards also beat Christ Church Thursday, Feb. 10. See the Tuesday, Feb. 15 Bulletin for details.