Senate Bill 510 may have passed quietly through the lame duck session of Congress back in November but it didn’t pass through without grabbing the attention of Western North Carolina farmers and farm officials.

“The bill is big – it’s a huge bill,” said Debbie Hamrick with the N.C. Farm Bureau. “It instructs the Food and Drug Administration to undertake a huge amount of lawmaking.”

Lynn Sprague, director of the Mill Spring Agriculture Center, held a discussion, sponsored by MountainBizWorks, of the bill with local farmers Jan. 27. Sprague said it’s hard to dispute the importance of protecting the food supply.

“Food safety – you just can’t argue against it. We want our food to be safe, we want to have it healthy,” Sprague said.
But he said there are portions of the bill that have farmers roused.

“If you just take an initial read of the law, it’s really scary,” Sprague said. 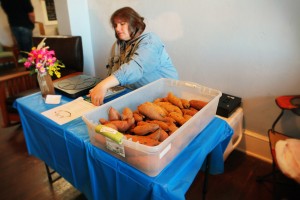 The authority now rests with the FDA to enforce recalls, detain products or suspend a farms registration and operations.

Jeff Searcy began farming 30 years ago. Now he harvests 50-60 acres per year in vegetables that he regularly sells through brokerage houses and Foothills Connect, a program that connects farmers with chefs in Charlotte.
Because of his connection with these co-packing facilities, Searcy began keeping his eye on the proposed new Food Safety Modernization Act about two years ago.

“I think it’s going to cause some hardship for some farmers,” Searcy said. “There are probably parts of it that are good, but I think now they might just make us prove [the safety steps farmers take] instead of taking our word for it. I don’t see trying to come in and fix something that worked.”

Hamrick said the legislation requires the FDA to create new regulations for the farming industry, then take comments on the regulations before enacting them.

This takes a tremendous amount of time – years even, Hamrick said. Sprague said he expects to watch this play out over the next three to five years, although legislation requires some changes to go into place within one year.

Hamrick said the regulations created have to be based on science and address the most serious produce safety problems first. This almost guarantees leafy greens will be one of the first products looked at, Hamrick added. But the rest of the timeline appears hazy, as the bill remains unfunded.

Timeline
Within that first year, the FDA must write produce safety standards.

The FDA, Hamrick said, has been in the rule-making stage on those standards for the last year. She said the rules would likely call for on-farm food safety plans, which would assist farmers in identifying risks and having a plan in place for what to do if a problem arose. For example, Hamrick said such a plan would map out a farm’s procedure should a worker discover animal feces on tomato plants. She said regulators want to see that farmers know ahead of time what they would do in a situation that could be potentially harmful to consumers.

Within nine months, two traceability studies must also be done, one for processed foods and one for produce.
One move that could be passed down would be mandatory use of bar codes for co-packing facilities.
With an apple co-op, Sprague said, you might have 30 farmers storing produce for their farms. He said new standards will likely require each section to be easily identifiable back to the exact farm and portion of the field from which it was picked.

Jeff Searcy said this already happens. When he began selling produce through brokerage farms several years ago, Searcy received a number that remained attached to his produce specifically as it was shipped out. Through Foothills Connect, Searcy’s vegetables also get labeled with a bar code before the trek to Charlotte.

He said all the farmers in the program make a point of washing and inspecting produce before it’s shipped out.
GAP certification

One of the main changes Sprague expects to see as a result of the legislation is a change in attitude and requirements from large stores and distributors.

Sprague said while not all currently require contributing farmers to hold Good Agricultural Practices (GAP) certification, the fallout from the bill on the food industry could push the issue.

“Some of the major distributors have not gotten to the point of requiring GAP certification,” Sprague said. “We’re going to see eventually that all of them will require it down the road.”

Sprague said if you are a co-packer, GAP certification requires a third-party audit, which can be costly. For basic farmers, he said it requires basic practices – how clean are your holding bins, where the bathrooms are related to the product and if any wildlife has direct access to the crop.

“A farm itself shouldn’t have too much trouble getting certified,” Sprague said. “Those things will become requirements dictated by the market. So even if you have some protections from the FDA coming in and shutting down a farm, the market will require you to take these precautions.”

Bill Barker and his wife, Lee, do organic gardening and raise free-range chickens and dairy goats. He worries the legislation allows big industry to dictate regulations. He said the cost for those regulations would be a drop in the bucket for corporations but would financially cripple smaller operations.

“Like most things in government this is going to be put together by industry, by industrial agriculture,” he said. “When they put together rules, they obviously will work to make the rules work for them. They’re likely to work to push out the competition, and the competition are the small local people.”

Protection
Hamrick encourages farmers to be proactive by having a food safety plan in place.

She also suggested farmers attend a training program conducted by the North Carolina Fresh Food Safety Task Force, which in the future will provide thorough education about the elements of a food safety plan and the best agriculture methods. She said the task force also plans to make model food safety plans available for download in the future.

Sprague said one of the immediate downfalls of the legislation is the creation of additional work for farmers. Hamrick agreed that would be a major sticking point for some.

“To be honest, a lot of farmers are not looking forward to this … because it’s going to require time,” Hamrick said.
What the farmers lose in time, Sprague said, is made up however in protection. Sprague said the legislation would prevent an entire industry from being shut down because authorities couldn’t easily identify from which farm the bad produce originated.

A provision in the bill, sponsored by Senator Kay Hagan, also seeks to provide assistance to farmers who suffer losses due to erroneous recalls.

North Carolina tomato growers, for example, suffered more than $100 million in losses when tomatoes were cited as the cause of a salmonella outbreak. The FDA later confirmed the problem originated with contaminated peppers from a farm in Mexico.

“We all see what happened with the tomato incident and it came back eventually that there was never a problem with our tomatoes, but it still hurt us,” Searcy said.

Demand for tomatoes dropped 50 to 60 percent after news spilled that the produce could be to blame. Hagan’s provision would require the government to evaluate ways to compensate farmers affected by erroneous recalls.

Hamrick said authorities simply want producers to raise a red flag when they believe they have a problem with their products, so minimal damage is done to the overall system. She said if a farmer or producer brings up an issue early enough, stores could pull the items before they ever touch shelves.

“It’s not rocket science, but you have to think about what you’re doing,” she said.

Small farm amendment
Sen. Hagan played a major role in trying to keep the bill reasonable, Sprague said.
Hagan cosponsored an amendment with Sen. Jon Tester (D-MT), who is a farmer, to exempt small producers from the new regulations. Under the Tester-Hagan amendment, small producers would continue to be regulated at the state and local level.

The provision applies to small producers who earn $500,000 or less in annual sales and sell most of their food directly to consumers, local restaurants or retailers within a 275-mile radius or within the same state.

“Because of this amendment, small farmers can continue bringing their homemade jellies, vegetables and freshly baked bread to the farmers market without being overburdened by new government regulations,” Hagan said in the release.

Hagan pushed for the amendment because she heard from a large number of constituents that were concerned their small farms would be required to adhere to the same safety regulations as larger farms, Hamrick said.

One of those farmers she heard from was Barker.

“I know they have these exemptions but it remains to be seen how that will play out for the smaller farms that fall just outside that exemption,” Barker said. “Right now the problem is nobody really knows how this is all going to turn out and I’m afraid it will be smaller farmers that get hurt in the long run.”

Local poultry farmer Dawn Jordan said, “I think they’ve heard the message that if this is mandatory for all farmers, there will be no food. I can’t afford $5,000 to have someone inspect my farm. I just can’t do it.”

Hamrick said the issue that concerns her most is that neither the amendment nor the legislation defined “food.”

“We don’t understand at this point and time what all that includes,” she said.
She did say, however, that it’s likely the amendment would protect small farmers providing food directly to consumers.

“You still have to pay attention to food safety because if you are involved in any sort of situation you could lose your exemption,” Hamrick said.

Sprague said the farmers at market tend to self-regulate each other already.

“As a market manager, I’m always watching, ‘Hey, that looks a little dirty’ and we all do it in a neighborly way,” he said.

Hamrick said most good farmers she knows do. They also typically keep a watchful eye on everything happening on their farm.

“Good farmers always keep records. I know a good farmer when I see one because they almost invariably have a little notebook they keep in their pocket to write down things about what’s happening on their farm,” she said.

Farmers across Polk County and the state expect to keep a watchful eye on the progression of the bill as agriculture generates $74 billion in economic activity and employs nearly one-fifth of the state’s workers.