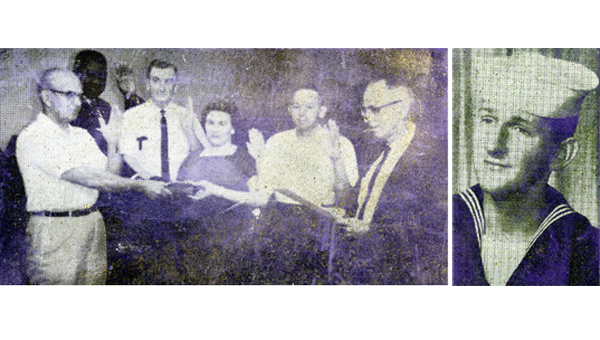 Left photo: "The gentleman second from the right in the picture was James David Culbreth, who was the manager of the Ford Place (now Stott’s Ford) under the ownership of Mr. Kuhn. The man third from the left resembles Red Kimbrell, who had a department store in town called Kimbrell’s, and later, Peoples Department Store, selling clothing for men and women." - from Doris Petty. James Payne (second from left) identified himself and Mayor R. E. Brantley (left), who was giving the oath of office to public housing authority board members, including David Culbreth, vice-chair (third from left), Mrs. Frank McFarland Jr., secretary; R.C. Kimbrell and R. C. Burnett, chairman. Right photo: "I am almost positive that the sailor in the picture is Lionel Green that passed away appx. 40-45 years ago. His mother is Pearl Alewine, who is still living in Landrum." - from Ginger Stone.

Editor’s note: To celebrate its 83rd birthday, the Bulletin is taking a look back at how the newspaper has been printed since its first issue on Jan. 31, 1928. This week’s article focuses on the early decades of the Bulletin, from 1928 until the 1940s, based on information from the 25th, 50th and 75th anniversary special editions. Also included are more of the images of the Bulletin’s old photo blocks, which we hope readers will help us identify. The images in last Friday’s issue brought numerous identifications and other information, some of which are included in today’s stories. These images will also be available on the Bulletin website, www.tryondailybulletin.com, and our Facebook page. If you can identify anyone in the images, or if you have stories or information to share about any of the photos, please comment on Facebook, send an e-mail to barbara.tilly@tryondailybulletin.com or just stop by the Bulletin office in downtown Tryon.
The 83 years of The Tryon Daily Bulletin provide a capsule history of the evolution of newspaper printing and production techniques, from the original hand-fed letterpress device in Seth Vining Sr.’s tiny job shop to the large offset web press that churns out thousands of copies an hour of today’s Bulletin.
Bob O’Neil, former production assistant, editor and occasional reporter for the Bulletin, said in the 75th anniversary edition that Hub Arledge demonstrated to him the operation of the “job press” used originally to produce the paper. Arledge is the son of Elbert H. Arledge, who was Seth Vining’s assistant. O’Neil said the process looked daunting.
“At every revolution of the big flywheel, the printer must quickly place the paper precisely on a flat plate that then rears up, like a closing jaw, to press the paper against another flat plate containing the raised type. To the unschooled observer, it looks as if one could lose a hand. After each impression, the printed sheet is ejected and rollers pass over the typeface to spread fresh ink for the next impression,” O’Neil said.
Starting the paper on a shoestring, Vining gathered production equipment wherever he could find it, and many people helped him out. It is recorded that, when he was looking for the large flat stone needed for newspaper composition, “W.S. Green offered him a tombstone, but Owen S. Bird happened to have a broken marble top off an antique dresser and gave him that.” 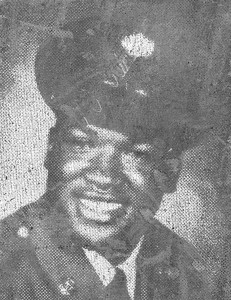 One of the unidentified photos in the type rack at the Bulletin. If you can identify this man, please let us know. You can e-mail barbara.tilly@tryondailybulletin.com or call 828-859-9151.

Typesetting, which Seth Vining Sr. did himself in those early days, also demanded a lot of skill. As he gathered news items, he often did not stop to write them out but set the story directly in type. This was done by hand, letter by tiny letter from the type case, reading the set copy upside down and backwards, and afterward laboriously returning each letter to its compartment in the type case.
At the beginning, the quantity of type was so limited that after finishing running off one page, the type form had to be disassembled to supply the next. If letters in the Roman font ran short, for instance, the typesetter might have to fill in the gap with italic. This at times created some odd emphases in the text, to the puzzlement of readers.
Garland Goodwin, who joined the Bulletin staff when the paper was only 12 years old, described his early experience with typesetting in an earlier anniversary issue.
“My grandfather, T.A. Rippy, took me in to meet Seth Vining Sr., when I was about 10 years old,” Goodwin said. “I was very much impressed with all the machinery involved in publishing the Bulletin, but I was most taken with the type in the cases – here were thousands of little blocks with letters on them, which could be arranged into words in perfectly straight lines with straight margins.
“I didn’t notice that the letters were “backwards,” and had no problem arranging the type in the composing stick. Mr. Vining was sufficiently impressed with my potential that he offered to let me come in on Saturdays and set up the display type portions of ads to be run in the Bulletin. I also cleaned up everything, and for all this he even paid me a dollar or so!”
Mrs. Vining (Gladys) took care of the business paper work primarily. She kept track of ads and subscriptions, billing for them as appropriate. She also answered the phone and greeted all who came in, all the while keeping a watchful eye on everything that was going on.
“Mr. Vining’s desk was always piled high with newspapers,” Goodwin said, “so that only the typewriter and telephone were visible. He read and clipped articles from other papers each morning, putting them on a spindle, from which I took them to the linotype any time I walked by. There was also a stack of newsprint sheets (typewriter size, what the paper was printed on in those days), on which to write news and ads coming over the phone. The scissors were tied to the typewriter frame with one cord, a pencil with another. Mr. Vining never lost a second looking for a pencil when the phone rang, and the shears always came right to his hand for clipping.”
“He typed a great deal, using two or three fingers of each hand. I never did learn to type because Mr. Vining could type faster than anybody I knew, and that was good enough for me. He had to type because Monte “Doc” Dedman was the only person alive who could read what Mr. Vining scrawled on those sheets of paper.”
According to Goodwin, “Doc” Dedman was the linotype operator, who also made up the forms for the press, and therefore was the heart of the production team.
The world’s smallest daily newspaper was produced under cramped conditions, in a small room under what was then the A&P store at Trade and Maple streets. Vining’s daughter Libby recalled: “There was the old hand press with its gooey black ink, the kerosene stove in the middle of the room and the big window that looked out over the vacant lot where farmers with their wagons and horses would gather to sell their wares.”
Before the purchase of lino­type and the automatic press, Vining taught local youngsters how to set type by hand and feed the press by hand. For some, it was the start of a press career.
As the Bulletin’s fortunes improved, new heavier equipment was purchased in the 1930s. One was a linotype, a keyboard-operated machine that produced solid lines of text cast out of lead, rather than individual letters selected by hand.
Another improvement was an automatic press of the cylinder type, wherein the type form was laid flat on a large horizontal bed that was moved back and forth as the paper was impressed on it by a revolving cylinder. The new press could accommodate larger sheets of paper and print at a greater speed.
Jim Vining, Seth Jr.’s grandson, recalls those early days of ponderous letterpress and linotype technology: “The lead type had to be melted and retyped every day in a linotype machine. One side of the sheeted paper (four Bulletin pages) were printed at a time. The printing plates were very heavy. All the tables in the press area were beefed up to handle them. Pictures had to be sent off to Spartanburg and converted to a plate for printing. I believe kerosene was used as a solvent to get the ink off, or clean up. If the press broke down, the Landrum Leader would print the paper for the Bulletin.” 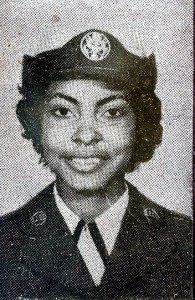 One of the unidentified photos in the type rack at the Bulletin. If you can identify this man, please let us know. You can e-mail barbara.tilly@tryondailybulletin.com or call 828-859-9151.

The old way of feeding the paper by hand was eliminated with the introduction of the Kluge press with an automatic feeder.
After the linotype machine, the Kluge automatic feeder on the press was the most fascinating machine in the shop to Goodwin. He said the feeder had mechanical arms and hands and used a vacuum pump to pick up the paper. Too little pressure would wrinkle the paper, too much would make it drop the sheets prematurely.
“There were lots of things that could go wrong on a mechanical marvel like that,” Goodwin said. “But Mr. Vining could always make it work, and would show me what adjustment he made and why.”
In World War II, hundreds of Bulletins were mailed to fighting men overseas. Those papers had to be single-wrapped, so Seth Vining hired more boys to do this work after school. Goodwin said Ben White Jr. joined him in this mindless endeavor.
Marvin Edwards Jr. was the master of the little hand-held machine which dropped the mailing labels onto the wrappers, according to Goodwin. The mailing list was updated weekly, printed on the big press in columns. Marvin split the sheets with a razor blade and glued the ends together into a very long column, which he then rolled up and placed into the machine. He filled the paste reservoir, threaded the label strip over the paste roller and through the advancement rollers, and he was ready to go. He advanced the strip one address and smacked the machine against the stack of wrappers. This action caused a blade to shear off the address label, which fell onto the wrapper. He snatched that wrapper out while advancing the roll, and whacked again. He applied over a hundred labels a minute this way, pausing only to make the stacks neat or to put another roll into the machine. Couldn’t let the paste dry!
Vining invested in new machinery and methods as they became available. At first the Bulletins were folded and inserted by hand, but later a folding machine was used.
Then Vining discontinued the old full-size weekly, the Polk County News, and enlarged the Bulletin to four columns per page. This change required a huge new printing press and a folding machine that also cut off one edge, presenting a folded and inserted eight-page paper.