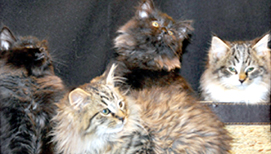 A litter of kittens that came in to Po'Kitties from a stray mother. They have all been placed in homes. (photo by Judith Kerns)

PetSmart Charities recently awarded Foothills Humane Society (FHS) an $85,000 grant for the Community Cats Project, a new program designed to reduce feral cat colonies in the area.
“We are excited and honored to receive this grant. It recognizes the accomplishments of our Trap-Neuter-Return program, Po’Kitties, and enables us to continue meeting our community’s pet overpopulation problem in a humane way,” said FHS president Ruth Grubbs. “We hope our Community Cats Project will become a model for other agencies across the country.”
The Community Cats Project offers free spay/neuter services and rabies inoculations for all free-roaming cats. This includes all stray cats and kittens and feral cats, in Polk County as well as Landrum, Gowensville and Campobello, SC.
“For PetSmart the bottom line is they want to see the intake of the shelter to go down and they also want to see cost to animal control go down,” said CCP Manager Dana Mayer. “Po’Kitties has worked for several years to do this, but there is always more to be done.”
Po’Kitties has trapped, sterilized, inoculated and returned more than 1,000 cats since October 2007. This program was created in 2007, because at that point and time, any free-roaming cats brought into the shelter were feral or wild were euthanized, Mayer said.
Po’Kitties has allowed the humane society to drop its euthanasia rate to almost zero, she said.
If a free roaming cat is tame or has kittens that can be tamed, then Po’Kitties gets them off the streets and adopts them out through the shelter.
With an estimated 3,000 free-roaming cats in the feral population, FHS aims to spay and neuter 1,400 a year over the next two years. The grant requires they spay and neuter a minimum of 1,000 a year.
Mayer said typical female cats can reproduce rapidly, giving birth to as many as three litters a year. More than 80 percent of the cats in shelters were born of free-roaming mothers.
“Once they are spayed and neutered and no longer having kittens, it really does make a difference pretty quickly,” Mayer said.
The average spay and neuter procedure for a feral cat cost $40. The Petsmart grant will not only cover the cost of spay and neutering but also for rabbies vaccinations and ear tipping of each feral cat. Mayer said the program does ear tipping of each feral cat so volunteers can easily identify them as part of the feral population once released.
Mayer said the programs are currently gearing up for the busiest part of their year – kitten season. Last year, FHS took in 1,050 cats.
“Fortunately, we live in a very kind community – we try to provide food to the caretakers if they need it, even the sheriff has done so,” said Mayer.
Mayer hopes to continue community education efforts to let people know these programs are available through word of mouth and direct mailing.
She said the program is always in need of more foster homes and more volunteers for the Po’Kitties.
The line to call for information on the Community Cats Project 828-894-2088.
FHS is a 501(c)(3) non-profit organization founded in 1957 to help reduce the homeless pet population through adoption and spay/neuter programs, and to provide humane education services to the public. Its Trap-Neuter-Return (TNR) program, Po’Kitties, has trapped, sterilized, inoculated and returned nearly 1,000 cats since October 2007.