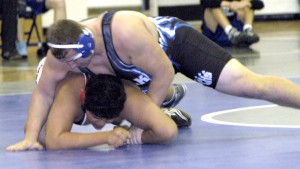 Polk’s Tyler Philpott wrestles in a match earlier this season. The Wolverine wrestling team hosts Mitchell on Wednesday night at 6 with the Western Conference championship on the line. (photo by Joey Millwood)

Before the season began, Polk County wrestling coach Brandon Schweitzer had a feeling the Wolverines might have a team that would be tough to beat. Like most coaches, however, he told his team never to look ahead.
“The longer I coach, the more I realize you can’t look down the road during wrestling season,” he said. “You have to address everything one match at a time and take time to develop your wrestlers. Hopefully by January, they are ready to compete and be successful in the conference and the post season.”
January arrived, and the Wolverines have shown they’re ready. Polk County will host Mitchell on Wednesday night at 6 p.m. with the Western Highlands Conference championship on the line.
It’s not going to be easy, Schweitzer said.
“Mitchell always fields an extremely tough, hard-nosed and well conditioned team,” he said. “They seem to never have a ‘down year’ when it comes to wrestling.”
How do the Wolverines stack up?
“I’ve had a chance to take a look at them and I think we match up with them pretty well,” Schweitzer said. “I’m looking forward to a very exciting match.”
How have the Wolverines gotten to this point?
Polk County has an odd mix of upperclassmen and freshmen. The mixture this season relied on those two ingredients coming together for an explosive product and it happened. In addition to the younger wrestlers developing faster than he imagined, the senior anchors on this team have stepped up.
“The seasoned veterans have really taken charge and led this team to where we are now,” Schweitzer said.
While at this point in the season, it’s still a team sport – the individual tournaments will begin in the post season – many Wolverines have excelled on the mat this season. Senior Tyler Philpott has led the charge with an undefeated 25-0 record. Juan Vera, Silvestre Ramirez, J.J. Maxwell, Caleb Russell, Kameron Painter and Jose Ramirez have dominated opponents in their weight classes.
Wednesday night will not be short of any drama. This is the first time the two teams will have met, and it will also be senior night.
“You only get one shot at each team so you have to make everyone count,” Schweitzer said.
The Wolverines hope this one will add to the count of championship banners hanging on the wall of the gymnasium.