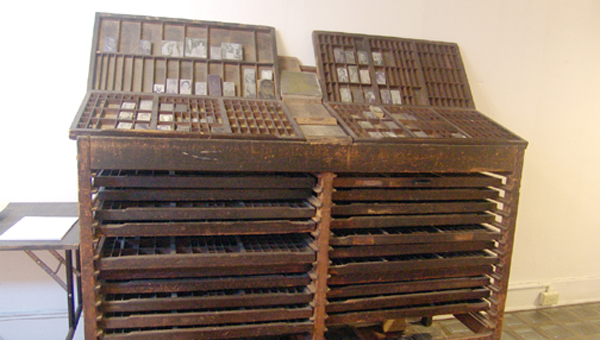 An old rack of Linotype photo and type blocks in the Bulletin offices (above) and Bulletin founder Seth Vining Sr. {right) as shown on one of the Linotype blocks. Over the next few weeks, the Bulletin will publish some of these images and post them on Facebook. If you can identify anyone in the images, or if you have stories to share about any of the photos, please let us know. You can comment on Facebook, e-mail samantha.hurst@tryondailybulletin.com, call Samantha Hurst or Barbara Tilly (828-859-9151) or just stop by the Bulletin office in Tryon. (photos by Leah Justice)

Today the Tryon Daily Bulletin celebrates its 83rd birthday – this is the first issue of the paper’s 84th year.
Our approach to celebrating our anniversary this year was inspired by some historical artifacts still in the Bulletin offices today – an old wooden rack of Linotype photo and type blocks in the hallway outside the editorial offices.
Some of the people in the photo blocks are identified, but many are not. Perhaps if we published images of these blocks,  we thought, readers might be able to identify some of the unknown people.
A few of those images are presented with this article; others will be published in the next couple of weeks, along with stories about how the Bulletin has been produced over the years.  The images will also be available on the Bulletin website, www.tryondailybulletin.com, and the Tryon Daily Bulletin Facebook page.
If you can identify anyone in the images, or if you have stories or information to share about any of the photos, please let us know. You can comment on Facebook, send an email to samantha.hurst@tryondailybulletin.com or just stop by the Bulletin office in downtown Tryon.
Brief Bulletin history
Editor’s note: The following was assembled from articles in the Bulletin’s 70th and 75th anniversary special editions.
In early 1928, Seth Vining Sr. (Pop) was working in a job shop he had set up while foreman of the weekly paper, The Polk County News (founded in 1898). 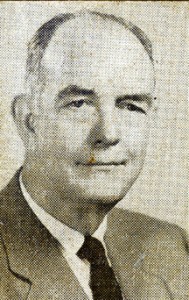 According to his son, Seth Vining Jr., Pop “found time hanging heavy on his hands,” so he printed up a four-page paper and handed it out on the street, free. The Tryon Daily Bulletin was born. After the first six months, the paper cost 1¢.
The original paper was 5½ by 8½ inches (“Readers Digest” size) – thus the slogan “The world’s smallest daily newspaper.”
The Bulletin was published six days a week at that time, operating from offices under the A&P Tea Co., now Owen’s Pharmacy, on Maple Street in Tryon.
The first advertiser in the first issue was Carter P. Brown, who placed a month’s order for an ad reading simply, “PINE CREST INN.” The cost was 30¢ an inch, 25¢ an inch for repeat ads.
In the 10th anniversary issue of the Bulletin, an article said the editor ran out of paper stock several times during the Depression years and printed the Bulletin on school notebook paper with holes and lines – twice on wrapping paper.
In June 1934, the Bulletin was consolidated with The Polk County News.
The Arledge family history is intertwined with the Bulletin’s. Elbert Hubbard, father of Hub Arledge, current owner of Arledge Printers in Tryon, joined the Bulletin staff in 1930.
The Bulletin moved to its current building in 1935, sharing space with Hester Real Estate, a print job shop and assorted other businesses.
Hubbard eventually bought the print shop, moving it to the current Arledge Printers’ location when the newspaper and job shop’s shared space got too crowded.
Hub’s uncle, Quinton, worked for Pop as a printer beginning in the 1940s.
“It was so crowded you didn’t have room to cuss a cat without getting hair in your mouth,” remembers Quinton Arledge, who worked for Pop Vining as a printer beginning in the 1940s.
In the 1930s and 40s, the newspaper occupied the rear section of its current building, which was enlarged after 1918. Later, the newspaper expanded into other spaces in the building.
The Bulletin was published six times a week until World War II, when supplies and personnel became scarce. 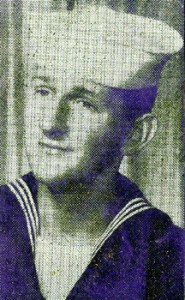 One of the Linotype photos - an unknown sailor.

The circulation of the Bulletin more than doubled during the war years, according to employee Garland Goodwin, who still writes a column for the Bulletin today. Subscriptions were entered for the men and women away from home.
Goodwin came in every afternoon after school to single-wrap and bundle the little papers for mailing to places all over the country and overseas.
In the Bulletin’s 70th anniversary special edition, John A. (Jack) Stephenson recalled daily life in what is now the first floor of the Bulletin office when he bought the Hester-Richardson Insurance business in the late 1950s.
It was unbearably hot, Stephenson said, and the noise from the Linotype machine was unbelievable: thunk, click, click, click, drrrr, thunk, all day long.
Stephenson had the middle section of the main floor, where Wanda Cash works now, and Waverly Hester sat more or less where Mike Edwards’ sales office is currently located.
The bank vault is still in Edwards’ office. According to Stephenson, Mr. Hester would write out insurance policies by hand, then toss the copies into the vault, not moving from his desk. The representatives from the companies had to go into the vault to find their policies on their monthly visits, he added.
It was so hot in there that Stephenson’s father bought them an air-conditioner, an early window unit. “We were one of the first air-conditioned offices in Tryon,” Stephenson said.
“I’d get in pretty darned early, but Seth and Gladys [Vining] were always here before me, and they’d still be here when I left, and I thought I was putting in a pretty long day,” Stephenson said.
Seth Vining Jr. began to work for the Bulletin as an elementary school student, writing addresses by hand on blank paper and then delivering papers on his bicycle.
After college, military service and working as a file clerk in the House of Representatives in Washington, D.C., where he met his wife, Marjorie “Bos” Vining, Seth Jr. returned to Tryon and joined the Bulletin. He did everything at the paper from sweeping floors to selling ads and covering sports.
On Dec. 31, 1975, Pop Vining retired. Seth Jr. and Bos took over the daily operation of the paper.
Seth Jr. followed in his father’s footsteps, literally, going from store to store selling ads and asking about news, covering Tryon, Landrum and Columbus.
In terms of policy, the Vinings tried to “keep the paper as neutral as possible,” Seth Jr. said. “We didn’t editorialize,” he continued, recalling only one instance when the paper took a stand, in defense of a high school football coach.
“It was a great crew,” the Vinings said in an interview in the Bulletin’s 75th anniversary special edition.
In January 1987, Pop Vining died at the age of 86. Much was lost with his death, Seth Jr. said.
“Dad had so much stuff in his head. When he died it all went with him.”
In November 1989, Seth Jr. retired, selling the newspaper to Jeff and Helen Byrd. He died on Oct. 20, 2008. His wife, Bos, still lives in Tryon.
Jeff Byrd updated the paper’s facilities. The basement of the building was renovated in 1993 and a 20-year-old, yet “modern” web press was installed to print the newspaper.
Since then, the digital world has changed the production of the paper greatly. 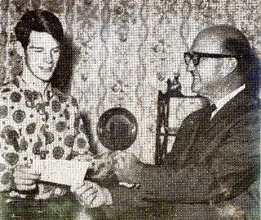 One of the Linotype photos at the Bulletin. The people are not identified.

The darkroom was last used in late 2001, and most articles and photos are now received by e-mail and prepared for print on computers.
In June 2008, film processing and developing equipment was installed, which marked the end of the manual paste-up process used for decades to create the flats for printing the daily paper.
As technology continues to change, the Bulletin will adapt, too. For example, a few years ago, the paper introduced a website (www.tryondailybulletin.com); an updated version was unveiled on Jan. 20.
In September of 2010, the Bulletin entered another new phase when the Byrds sold the newspaper to Tryon Newsmedia LLC, affiliated with Boone Newspapers, Inc. of Tuscaloosa, Ala. Betty Ramsey is the new publisher.
Through all these changes, however, the community focus of the newspaper has remained. Area residents still drop by with hand-written letters, news items and occasional photos of an outstanding vegetable from their gardens – and the Bulletin still publishes them.