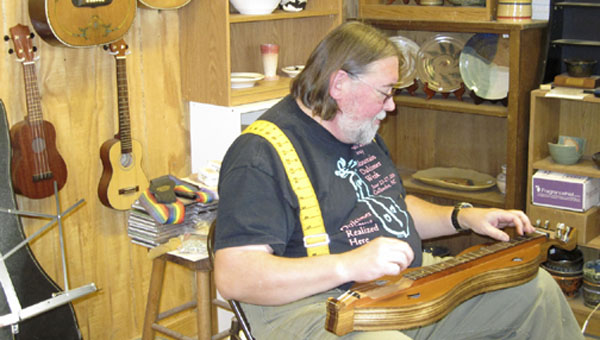 Ben Seymour plays a tune on one of the many dulcimers he’s constructed in his backyard workshop. (photo by Samantha Hurst)

Ben Seymour suffers from “instrument acquisition syndrome.”
Hundred-year-old restored guitars hang from his walls. Patterns and stacks of wood lying in wait to create dulcimers and mandolins cover his workshop.
“I don’t have a living room, we just have instruments everywhere – they are falling out in the floor,” he said.
Seymour’s drawn to every detail – the precise shape and curve of the wood, the tension of strings, the historic materials used to craft each piece.
“It’s basically just an attraction to music,” Seymour said.
Seymour sat down for his first piano lesson when he was 6 years old. He danced his fingers across the piano for 13 years, but said later in his teen years it was hard picking up girls playing the piano. Seymour said you could, however, hit on girls with a guitar slung around your back.
At 17, he picked up his first guitar and began what grew to be a lifelong love of music.
After high school, Seymour moved to Knoxville to attend the University of Tennessee. It was there he met the other love of his life, Becky Cleland, in philosophy of esthetics, an art class.
Cleland said his personality was infectious.
“Ben is so gregarious and fun, everybody loves him the moment they meet him and I think that has helped him so much along the way,” Cleland said.
Eventually, through his brother Wayne, who is also deeply entwined with the music community, Seymour crossed paths with well-known dulcimer player Lois Hornbostle.
The two enthusiastically traded talents.
Seymour taught her the art of stained glass – his and his wife’s profession at the time in Hendersonville – while Hornbostle taught him to play the dulcimer.
Seymour found himself immediately attracted to the unique drones emitting from the dulcimer. He said it has a particular timbre unlike any other instrument.
Dulcimers have a poor reputation as items sold at craft shows, Seymour said, where many people hear, “Oh, anybody can play the dulcimer.” He refers to the “dulcimers” sold at these events as DSOs or dulcimer–shaped objects; better used as wall art.
While he doesn’t think accessibility of music is ever a bad thing, he said the dulcimer’s reputation leads many to ignore the complex sounds one can produce with the instrument.
“There is so much more you can do with a dulcimer,” Seymour said. “Playing across the notes, you’re playing lead lines – you can hang with the big boys, so to speak.”
The Green Creek musician and luthier (someone who creates and repairs stringed instruments) began playing with the big boys decades ago – he started constructing dulcimers and guitars in 1982.
He’s created Paraguayan harps, travel guitars, mandolins, custom ukuleles and Irish bouzoukis, which are, as Seymour calls them, “mandolins on steroids.”
He’s hewn cherry dulcimers and a dulcimer with a Pasimasquaddy inlay.
His skill in constructing increasingly rare instruments quickly grasped the attention of fellow musicians around the world and allows him to champion not only dulcimers but a variety of nearly forgotten instruments.
Seymour found his forte in the production of historical pieces – many dating back centuries.
“Instead of just building a bunch of basic instruments, everything I produce has been customized to fit a specific musician’s order,” he said.
As one of possibly only three people in the world who actively produce dulcimer antecedents, Seymour has spent countless hours researching the history behind these musical relics.
Dulcimer antecedents are from a family of eastern European fretted zithers. (Zithers are instruments strung from one end to the other, with tension pulling from both ends.)
There are quite tricky roadblocks along the way of constructing such ancient instruments. For many rare pieces, there are minimal bits of information regarding how they were made.
“I do a lot of research,” he said.
Seymour is particularly well-known for building Scheitholts, a German instrument played during Revolutionary War days.
He’s in fact traveling in March to get his hands on several Scheitholts for the first time at the Mercer Museum in Pennsylvania. He’s studied photographs of the instruments and detailed descriptions from the museum curator but wants more interaction with these rare instruments – his passion.
One of his more unexpected requests was to construct a Langeleik – a Norwegian zither that has not been regularly built since the 1700s.
The language issue alone presented enough barriers to Seymour collecting information on the instrument. The fact that maybe only a handful of people in Norway even know much about the instrument was another.
Then there’s the added fact that the Langeleik isn’t an easy piece to carve.
“It’s this elaborate thing that was just boogerish to do,” he said.
The more boogerish the better, though, said Seymour, who relishes in the chance to tackle even the most difficult instrument project.
To learn more of Seymour’s work, visit www.kudzupatch.net.

Wreck sends one to Spartanburg Regional