Rising from ashes of home

When I told you, Just an ordinary Monday, I promised I would keep you posted on events, so here goes. &bsp;

First of all Caruso and Cosmo have found homes. These two beautiful big boys have been with me a long time, especially Cosmo, and were the two I didnt get to that Monday. Thank you Josh (Dogwood Farms) and Lori (Pet Tender Angels) for your invaluable assistance.

We spoke of Leo last week and beautiful Falcon is doing well with his treatments and is loved by all. Flash the Basset hound with the large fatty tumors, came through his operation wonderfully and has been scooped up by a great rescue organization. Thank you Dana for that one. Which leaves me with Riley and company, the gist of todays tale.

When the fire destroyed Julies home, Kait, her beautiful German and Belgian Shepherd-cross made it out safely. Julie suffers seizures and what this beautiful therapy dog means and does for her is another story unto itself.

Riley the big orange tabby, burned his ears, nose and the pads of his feet, along with breathing in too much smoke. He was rushed to Bonnie Braes where as I explained, had taken care of all expenses, when at the same time they covered Flashs expenses for me.

There were three other cats involved in the mishap, 2-year-old Daisy Rue made her way back to the ruins and was found unharmed the next day. This left us with the two missing cats I explained were lost, 3-year-old Myla and 8-year-old Coreanda, who is Rileys brother. After nearly a week, Myla and Coreanda were found in the basement of the burned out house, miraculously unharmed.

Riley, who is lovingly called King Riley because he rules the roost, was also back in the new place where Julie is staying and the team was once again whole.

Julie later called me and said Riley was having trouble with his paws and he was subsequently brought back to Bonnie Braes for post examination.

Riley had gotten into the wrong litter and his paws had become impacted and now there was a fear of infection. He was once again treated and scheduled to remain at least five days. In the meantime, I arranged for Julie to obtain large bags of shredded paper to use in all her litter boxes through F.H.S., Angie was kind enough to coordinate it.

While visiting Riley and Flash, Dr. Fitch called me to the side to discuss Riley.

How are you doing Lennie? he asked.

Fine Ian, how are you and the family?

Were well, he smiled.&bsp; Listen Lennie, he went on, we have some funds through Randy Grobe and Ill keep my costs down to the minimum so Rileys fees will be either small or nonexistent.

God bless you Ian, was all I could say.

You just keep doing what youre doing Lennie and well do our best to assist when we can. &bsp;

I fought hard to fight back the tears, these folks had just absorbed an enormous fee for sweet Flash and now this.

I think what moves me most when dealing with our local vets is not just what they do for my kids but the open hearts and joy they exude while doing it.

Riley is doing fine and will soon take up his position as King. To you Ian and Angel, bless your hearts and may our good Lord pay you back tenfold. 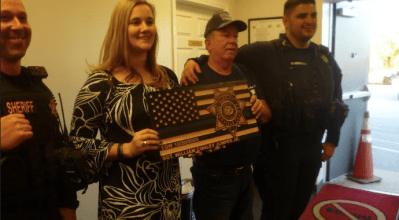 Rising from ashes of home