When an Irishman makes his mind up, it&squo;s for good.

At 36, the Irish native and winner of the 2001 $150,000 Breeders&squo; Cup Steeplechase, quietly slipped out of his silks and into the role of aspiring trainer.

To see Murphy race is to see a natural born horseman in action. A humble, introspective athlete, with an ironclad work ethic, his greatest concern rests with the horses he rides and their total well-being. Every stride, every jump and every moment in the saddle is clearly &dquo;meant to be.&dquo;

In 2006, he won The Bright&squo;s Creek Race at the Block House Steeplechase on the scopey jumper Brave Intent. A photograph taken of the two tells the tale:&bsp; Mur-phy, spattered with mud, sports a shy grin, with one weathered hand patting Brave Intent on the neck. Murphy went on to place second that day in the Budweiser Cup and the Carolina First Block House races.

Murphy, who stills rides for famed trainer Tom Voss of Monkton, Maryland, has not entirely stepped out of the irons.

&dquo;Everybody in life has an ambition as to what they want to do. Riding and working with horses has been my life&squo;s ambition since I was a child. There was never a &squo;Plan B,&squo; because I never planned on doing anything else with my life,&dquo; Murphy said.

Having worked with some of the greatest racing legends in the sport, in America and the U.K., Murphy feels he has learned from the best.&bsp; A graduate of the British Racing School, his first job as a jockey was under the tutelage of Sir Mark Pres-cott, hailed in the U.K. as one of the top trainers in flat tract history.

In 2000, when Murphy came to the U.S., he got his first break riding for NSA&squo;s all-time leading trainer, Jonathan Sheppard. Murphy credits Sheppard as being one of the most exceptional trainers he has ever known.

&dquo;I would not hesitate to ask Jonathan Sheppard for advice if I needed it. He is always willing to listen and help where he can,&dquo; said Murphy.

In two weeks, Murphy will put the first of his three charges to the test&dash;four-year-old filly Echo Tap is slated to run her first race at Pamlico. You can bet Murphy will be mentally running with her every step of the way.

&dquo;I am grateful to have the wealth, knowledge, and experience I gained as jockey combined with my love of training.&bsp; It&squo;s time to make my own recipe for a winner now,&dquo; Murphy said.

Murphy also noted that he would like to have his barn split between flat racers and steeplechasers. He seeks to develop a broader base of owners throughout the south, and to reach out to horse enthusiasts who would like to experience the fun of owning a steeplechase horse. &bsp;

&dquo;Steeplechasing is a family oriented sport. You can watch your horse run on the weekends and enjoy the day with your friends and family without spending your life&squo;s savings,&dquo; Murphy explained. &bsp;

A fan of the Tryon area and the Block House Steeplechase, Murphy said he would love to see more owners from North Carolina become involved in the steeplechase racing. &bsp;

&dquo;Tryon is definitely horse country and the fans down there seem to love steeplechasing. It would be great to have a local owner run their own horse at the Block House some day,&dquo; said Murphy. &dquo;And if they ever need a trainer&dash; well, I know a good Irish lad that is available.&dquo; 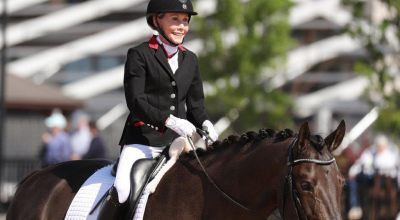