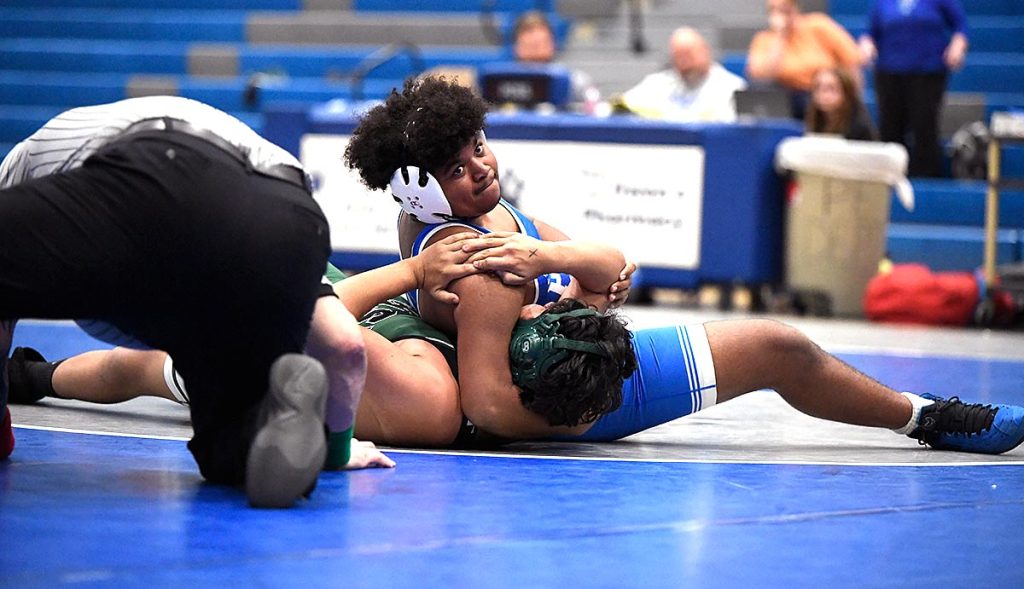 Whether Polk County’s young wrestling squad is set to challenge for a Mountain Foothills 7 Conference title remains to be seen.

But the Wolverines are certainly putting a foundation in place to do so.

Polk County kicked off a home quad match on Wednesday by defeating Brevard 51-28 in an MF7 match. That victory and another later over Walhalla, S.C. helped improve Polk’s dual match record to 4-2 overall and, perhaps more importantly, 2-0 in conference matches.

The Wolverines topped Walhalla 48-32 before dropping a 54-30 decision to East Henderson. But it was the Brevard win that satisfied Polk County’s focus entering the evening.

“Brevard beat us last year, so it was really good to come back and win,” said Polk head coach Thomas Hensley. “That’s something we’ve been talking about all week, let’s right our wrongs here. We ended up winning convincingly, so I was pleased with that. That’s a good program, another conference opponent and region opponent.

“To be 2-0 in the conference starting out, that’s pretty positive.”

There were contributors throughout the lineup in the three matches. Jayden Virgil and Dakota Ridings each finished 3-0 for the evening, with Grace Settles, Carter Wade, Amon Villarreal, Aiden Billings and Shatter Johnson each earning two wins. Freshman Kamron Montgomery also scored the first victory of his high school career with a pin in the East Henderson loss.

Montgomery’s victory came as part of a late-match rally after East Henderson raced to a 48-0 lead, winning the first eight matches.

“I was pleased with the first two matches. The third one started off pretty poorly,” Hensley said. “They’re really good there. But I told the guys, you take three of those matches and flip them, and we win the dual. Wrestling is as simple as that.

“What’s keeping us from other teams at this point is that we have to begin to gain more urgency, more awareness of what’s going on. You saw that with East Henderson, a few of their guys looked up and were like, I’ve got to score right now, I’ve got to get out right now.

“We’re just going to keep getting better. I told the guys I’m so proud of them, going 2-1 tonight.”

Polk County returns to the mat on Saturday, traveling to Pisgah for The Nation Call Out Duals.