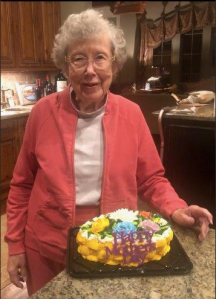 She was a schoolteacher for over 30 years, having taught thousands of students in commercial business in the Polk County North Carolina School System and General Business, Business Law, and Typing in the Circleville, Ohio, and Laurelville, Ohio School Systems.

She was actively involved in the Business and Professional Women’s Club, the Church Circle, and was a volunteer for both the Pickaway County Board of Elections and Berger Hospital during her retirement years.

Peggy loved to teach, and her greatest thrill was knowing that she had helped a student learn and perfect skills that would serve them in their future lives.  In her spare time, she tended to her flower gardens each year.  She had a wry sense of humor and read comic strips each day – with her favorites being Peanuts, The Far Side, and Calvin and Hobbes.  She played the piano, enjoyed all music, and had a special affinity for The Beatles.

A friend to all she met, she will be dearly missed.

The family will receive friends from 12:00 to 1:00 pm Friday, November 11, 2022, at Gramling United Methodist Church in Gramling, South Carolina.  Funeral services will follow at 1:00 pm in the church sanctuary conducted by Reverend Rick Brown.  The burial will be in the church cemetery.