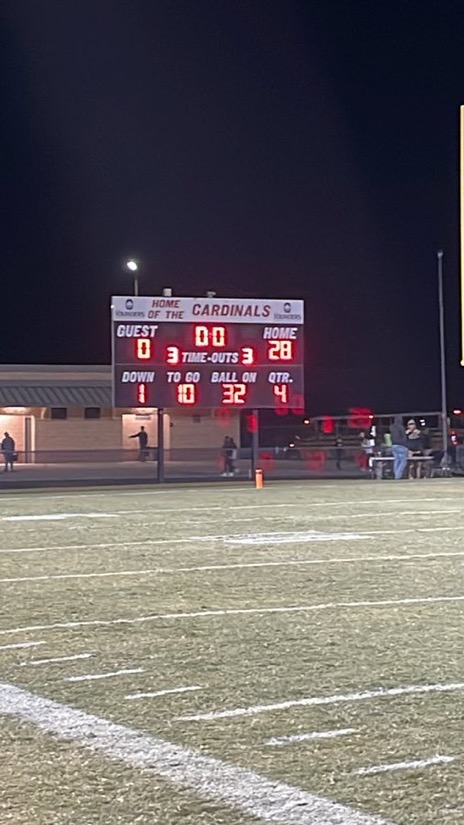 With Hurricane Ian approaching the Southeast, high schools in the Carolinas expected to be impacted by the storm changed their football schedules, moving games from Friday to Thursday.

The rescheduling may have shorted Coach Farmer’s team a day of practice. Still, it did not seem to affect their preparation as the Cardinals came out hot with star back Colton Link taking the ball 83 yards for a score on the opening drive of the game. It was one of the longest runs from scrimmage in the state so far this year 2022. Senior kicker Eli Graham, one of the most dependable kickers in the state, tacked on the extra point to put the Cards up 7-0.

Chesnee’s punter helped keep Landrum backed up in their own territory for the rest of the quarter, but halfway through the second quarter, quarterback Titus Poore and Landrum got some traction taking the ball on a 72-yard drive capped off by an AJ Lindsey – yard touchdown run.  A turnover on possession ended another Landrum drive leaving the halftime score at 14-0.

In the third quarter, the teams traded turnovers with senior linebacker Marco Gonzalez intercepting Chesnee QB K.J. Proctor. Landrum turned the ball over on downs twice more, but momentum was clearly on their side. They added two more fourth-quarter touchdowns to put the game away 28-0.

The Cardinals continue region play with their homecoming game versus Ninety-Six (4-2,1-0) this Friday, 7:30 at Cardinals Stadium. Ninety-Six is coming off a 24-13 win over Blacksburg. A homecoming parade will begin at 4 p.m. at the Landrum depot and end at Landrum Middle Wednesday.