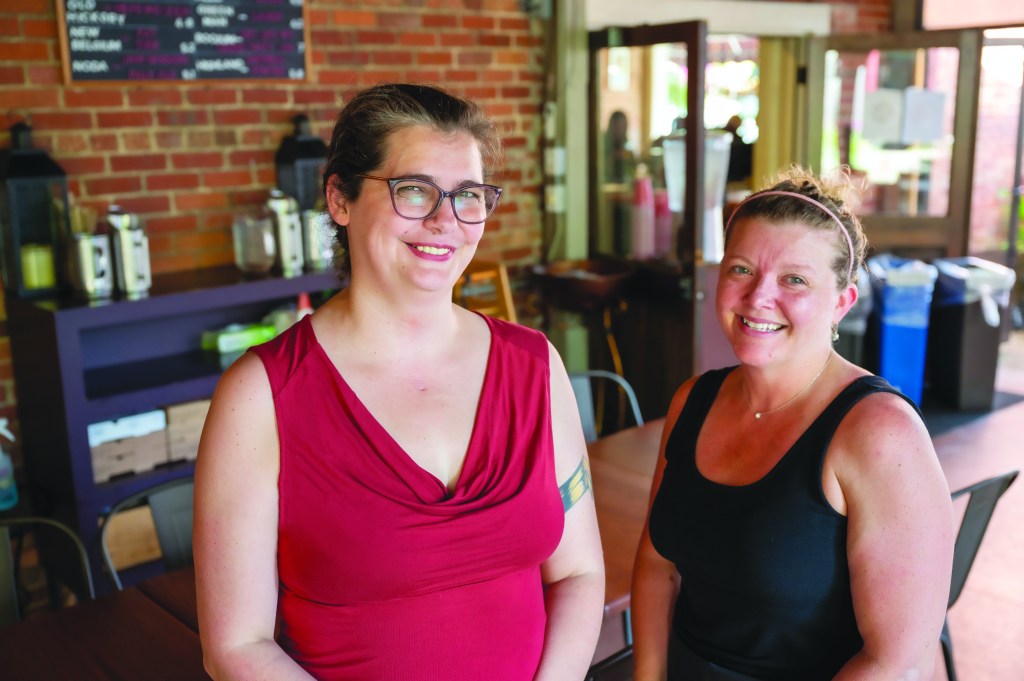 Co-owners Emily Lamar (L) and Chambli Stuber (R) each worked at The Purple Onion as teenagers. They bought the restaurant in 2020 after founder and Emily's mom, Susan Casey, decided to retire.

When you start to peel away the layers it’s very easy to see why many in these parts will argue The Purple Onion is not only Saluda’s, but perhaps the whole region’s favorite restaurant. Yes, it’s a bold claim, but once you step inside it feels a lot more like a family gathering and a lot less like a normal eating establishment – especially on a music night!

“We are totally yin and yang, and we make this thing run because we are complete opposites,” says a laughing Emily Lamar of her relationship with long-time friend, co-worker and now co-owner Chambli Stuber of The Purple Onion. “And it works!” 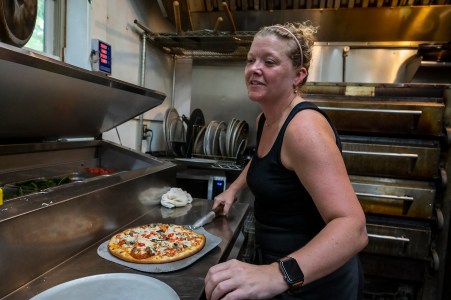 Both women cut their culinary teeth at The Purple Onion. Emily began in pastries at the age of 17, while Chambli started as a dishwasher at the tender age of 14, and quickly made the move to the kitchen where she excelled. Before she had turned 18, Chambli was already head cook. Eventually, Emily would move into the business side of the restaurant and Chambli would take a break to attend culinary school before returning to the Purple Onion a few years down the road.

To understand The Purple Onion’s success in 2022, it is important to look back at the roots of this local culinary gem situated in the heart of Saluda.

Emily’s mom, Susan Casey, and her sister opened The Purple Onion in November 1998. They had grown up on a tobacco farm outside Kinston, N.C., and Susan would prepare the midday meal for the tobacco crew and family. Most of her ingredients came from the farm and were often picked just prior to preparation. Susan’s use of fresh vegetables and fruits, as well as farm-raised and smoked meats, were the palette from which she’d learn to create a cuisine that is now the culinary foundation of The Purple Onion.

Chambli says the food at The Purple Onion is best described as a variety of ethnically inspired dishes with an emphasis on the Mediterranean’s simple and healthful cuisine. The menu offers a variety of pizzas, pasta, seafood, vegetarian and meat dishes that use locally raised trout and organic locally grown produce when available, as well as antibiotic and hormone-free meats and poultry. They also offer fresh locally roasted coffee and espresso, as well as an impressive selection of fine wines and local craft beers sure to meet even the most discriminating tastes of clientele found in these foothills. 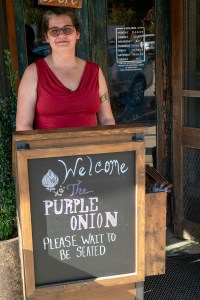 Emily Lamar prepares to welcome guests to The Purple Onion.

“They wanted a gathering place for the community that served good, healthy cuisine and live music,” Emily explains about her mother and aunt’s philosophy with the launch of the restaurant. Her aunt eventually moved on from the business after a few years, but the two sisters established something special that has stood the test of time. “They wanted a place where folks could come together and eat, talk and listen.”

Emily and Chambli say bringing people together to enjoy healthy food, camaraderie and music is still the goal, and what they strive to emulate and achieve every single day. To them, it is critically important to ensure they continue to stay true to what was first envisioned for The Purple Onion almost 25 years ago. In fact, that is the driving reason they decided to buy the restaurant when Susan decided to step away from the day-to-day running of The Purple Onion.

“Emily and I bought it [The Purple Onion] when Susan was ready to retire, and rightfully so,” Chambli says from an outside table on the covered patio. “The thought of someone else buying it and turning it into something different from what Susan worked so hard to do here was scary, so we didn’t want to see that happen.”

The thought of owning a restaurant was equally as scary for the two steadfast friends – especially buying The Purple Onion at the onset of the Covid-19 pandemic.

“Owning a restaurant, why would you,” Chambli says while breaking out with infectious laughter. “But that’s why we bought it… we both love this place, we grew up in this place, Emily’s kids are working here now and we’re all carrying on the tradition. It’s just super important to us and to our employees to keep this special place, special.” 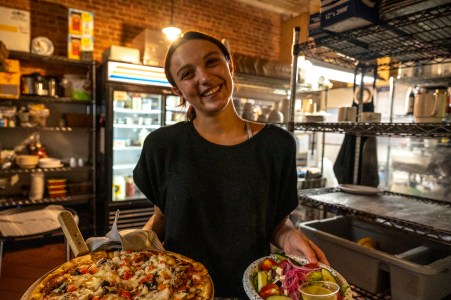 Service always happens with a smile at The Purple Onion.

With great pride and fondness, Chambli speaks of the relationships built over the years between staff, as well as The Purple Onion’s customers.

“I love doing this, especially with the people I share it with, not only with my partner but also with our staff,” says Chambli to a background of rhythm and blues music playing over the patio speakers. “The relationships that I’ve built here. I mean, Emily’s younger sister has been my best friend since we were kids and that’s how I first got involved here. And now Emily and I are like sisters too, so that’s a reward in itself. And the relationships that I have with our staff, they’re like my family.”

After culinary school, Chambli struck out on her own and found work at some of the most prestigious restaurants and country clubs in the area. She chose to come back to Saluda because it offered something unique living in this small town, that she says couldn’t be found elsewhere.

Pride and a strong work ethic is evident in everyone who makes the Purple Onion run like a finely tuned machine. Like most establishments, finding staff these days is a challenge – especially since Covid.

During the early days of the pandemic when there was a great deal of uncertainty about restaurants surviving, the pair would often gather with staff and friends for tacos and margaritas. Along the way an idea was hatched for a new culinary adventure, if the opportunity arose. When word spread of another Saluda establishment being forced to close its doors, the two entrepreneurs knew it was their moment and stepped up to open their second Saluda restaurant, The Saluda Purple Onion Taqueria, better known in town as The S.P.O.T. It offers a diverse and fresh new take on tacos, burritos, dips and quesadillas, as well as craft margaritas and cocktails.

Last year The Purple Onion served more than 65,000 patrons. Many of those patrons come from other places during the summer, but the rest of the year, the restaurant has a very loyal and supportive local following. Prior to the pandemic, the restaurant regularly had 45 employees on staff. Now, The Purple Onion and The S.P.O.T. have a combined staff of 36 employees. There are too many exhausting days when Chambli and Emily take on many duties and extra hours that would normally be left to others, but it’s one of the challenges that brings the two of them together, knowing they each have a stake in keeping a thriving restaurant alive in their mountain town.

The Purple Onion is also known far and wide as one of the best and most intimate music venues in western N.C. From the start, music has played an invaluable role in bringing people together at the restaurant and the music slots that are available are coveted by musicians. The Purple Onion has hosted some of the hottest names in Americana and folk music, says Emily. One of the more notable that stands out to her was the Avett Brothers taking the stage 21 years ago.

On this warm night during the lazy days of summer, the show is sold out for Aaron Burdett, a well-traveled musician from the mountains of N.C. who’s known for his songwriting prowess. He’s won top songwriting awards from prestigious competitions hosted by the likes of MerleFest, Mountain Stage, and the USA Songwriting Competition to name a few.

The tables are filled. Food flows from the kitchen where Emily looks in as her kitchen crew bangs out freshly prepared meals from their four pizza ovens and stove. There are no fryers or microwaves in this finely tuned kitchen. The bar is crowded. Smiles and laughter are heard from all corners of the room, and everyone is in a festive mood. 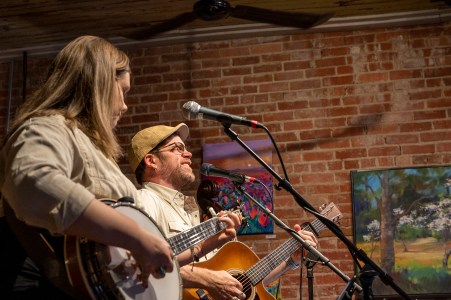 Aaron Burdett and his band play to a standing-room-only crowd at The Purple Onion.

Emily takes the stage with the band to welcome everyone as family and friends to the night’s entertainment. As Burdett strums the first strains of his guitar and the banjo, fiddle and upright bass join in to accompany the singer/songwriter in a raucous tune, Emily quietly exits to the shadows of the restaurant where she and Chambli stand with smiles as bright as the stage lights.

The day started early, and the night will run long for them and their crew. It’s moments like these that provide the “why” it was important to keep The Purple Onion in the family, and to carry on a tradition that aims to be a mainstay in these foothills for many years to come.

Photography by Terry and Cher Brown