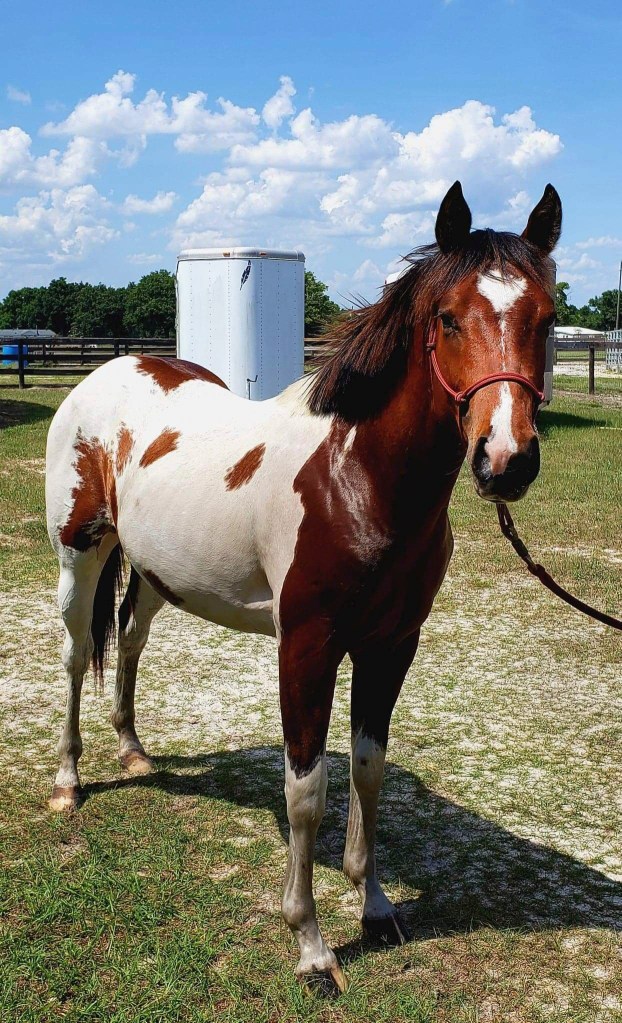 Leo at age 3 preparing to depart to Kailey Greene in Rutherfordton, NC

Ponder the power of a name. Take mine, for example, Pebbles. It means a small usually rounded stone, a transparent and colorless quartz crystal, or an irregular, grainy surface.

Readers of a certain age may remember the adorable fictional cartoon character, Pebbles Flintstone. She was the daughter of Fred and Wilma Flintstone, who resided with modern-day conveniences in Bedrock, living among dinosaurs and cave dwellers, circa 1,000,000 B.C. Her frocks always sported a spotted, eye-catching pattern. My mistress, Heather Freeman, named me for my brilliant dapples. They resemble small, smooth, lighter-toned pebbles that have been dropped uniformly all over my glossy coat. 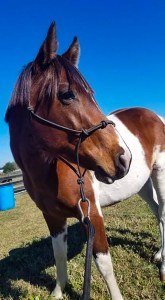 Leo as a two-year-old in training in HERD

Let us take the name Leo into consideration. First, it is derived from the Latin word meaning “lion.” Leo is a cognate for Leon. It was a popular name among early Christians. In fact, 13 popes, four saints, and countless kings and emperors have held variations, including Saint Leo I who was born into a Roman aristocratic family. He was the first pope to be given the title “the Great,” and was widely respected for his dedication, intelligence, and persuasive nature, during the 5th century. Then, the first famous Leos many people think of are the Russian literary giant Leo Tolstoy, artistic master Leonardo da Vinci, and, of course, Oscar-winning actor Leonardo “Leo” DiCaprio.

Leo is also one of the twelve signs of the zodiac. Those born under this symbol are said to be ambitious, kind, big-hearted, and generous. They love luxury and comfort. They have the gift of giving their undivided attention when engaged with others. Those born in the house of Leo also enjoy the limelight and being the center of attention. These attributes well describe my topic of exploration this month, the journey of Tuff Two Eyed Leo.

He was born in Mississippi in 2019. His breeder owned the mare Chex Two Eyed Fantasy, and his sire, King Leos Skywalker. 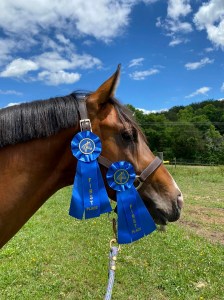 He was small, as neither of his partners were larger than 14.3. Leo the yearling was a bit gangly looking, and worst of all, he was a cryptorchid. That meant the gelding process was going to cost someone at least $1,800. In hopes that Leo did not fall into the hands of a kill buyer, which frequented the livestock horse sales close to Leo’s birthplace, his owner drove him to Texas. She entered him into a registered paint horse sale as she had covered the added expenses of registering him to enhance his value. Despite her valiant efforts, Leo wound up in a bad place.

Heather spied Leo listed in a kill pen in Texas. He looked pitiful standing in knee deep mud, his head hanging low. The rescue Heather runs, Helping Equines Regain Dignity (HERD), contacted the kill buyer and purchased Leo from afar. Tim Riffe was heading with his trailer to Texas from North Carolina and agreed to pick up the colt and bring him back for quarantine. We all knew the colt would be sick from being held at a kill lot with other exposed livestock. 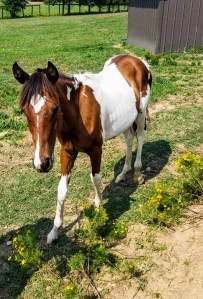 Leo as a yearling, thin and in quarantine in NC

Leo arrived in HERD within three days and was exceedingly tired and thin. He was kept in a small quarantine paddock with a shed for one month. Luckily, he had company, a palomino gelding, Mason, who was also saved that same week from slaughter. The two appreciated the shelter, healthy food, and daily care, improving over the course of a month.

Once the vet cleared, Leo caught a ride to HERD’s facility to grow up under our watchful supervision. He was the kindest of young colts, so easy to manage and respectful. Leo had a good relationship with everyone, including the towering thoroughbred, Cool Joe, who became his closest friend while in our care. No doubt about it, Leo was a saint and as he matured, we knew we had one special paint in HERD that needed to be gelded to begin under saddle training.

We reviewed Leo’s registration papers and decided to contact Leo’s former owner in Mississippi. Heather updated her on HERD’s rescue efforts to spare her colt from slaughter. The owner was sad to learn that he had ended up in a kill lot after her efforts to avoid this happening. She was also delighted to know Leo was alive and well.

Next, HERD successfully raised the funds for Leo’s expensive gelding cryptorchid surgery. He survived his invasive operation and was released from the hospital the following afternoon. 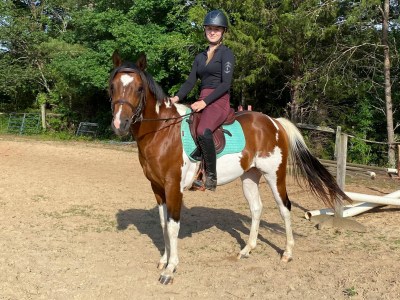 Leo in training under saddle at Shingle Hollow Farm

Kailey Greene of Shingle Hollow Farm in Rutherfordton, N.C. trains young horses for HERD and agreed to board Leo for his month of recovery and then begin his under saddle training. Leo was now over three years old and ready to find a working career. When he arrived at Kailey’s farm, Leo had a grand surprise awaiting him. His best friend, Cool Joe, was part of his welcoming committee. Kailey’s sister, Emily Holden, had adopted Cool Joe from HERD. The two horses were joyously happy to reunite. Leo had to wait a few weeks before he could be turned out with Joe to play, but they visited nightly, stabled next to one another. This certainly enhanced Leo’s healing experience.

It took no time for Leo to accept a rider. Kailey trailered Leo to a horse show during his first month of training, showing in hand for the conformation classes. Leo loved being in the limelight. It was no surprise that he brought home blue ribbons.

Leo is stunning, and his royal-like manners are exceptional. His intelligence far surpasses most young horses his age. Our Tuff Two Eyed Leo is truly another Leo “the Great.” 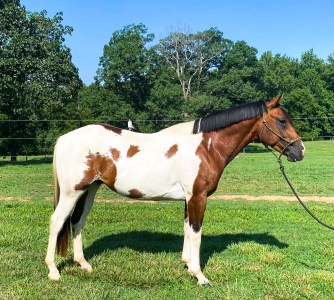