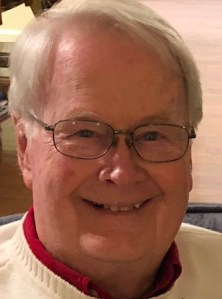 Columbus– Albert Henderson Creasy, age 86, died unexpectedly from natural causes on September 24, 2022, at Tryon Estates in Columbus, N.C.  He left as he lived, quietly and without bothering or being a burden to anyone. He was born in Wilmington, N.C. on January 31, 1936, to the late William Bullock Creasy, Sr., and Mary Elizabeth Kelly Creasy.  He was predeceased by his brother, Bill Creasy, and his niece, Elizabeth Creasy.

Al attended Duke University on a naval ROTC scholarship.  Upon graduation, he served as a Lieutenant Junior Grade Gunnery officer aboard the newly commissioned USS Morton (DD 948) until 1961.  He then joined State Farm Insurance Company in Murfreesboro, Tennessee, and worked his way up to assistant vice president of Data Processing, ending his 35-year career with the company in its Bloomington, Illinois headquarters.

After retirement, Al and Fran moved from frigid Illinois to make their home in NC, the state of their birth.  They chose beautiful Tryon to build their dream home and quickly became involved in the local community.  Al used his love of genealogy and history to help the Polk County Historical Society (PCHS).  He researched all of the cemeteries in Polk County and published a book about them.  He also helped to digitize the old media of PCHS. Throughout his life, he was a treasurer or board member of many organizations, including Calvary United Methodist Church in Normal, Illinois, PCHS, Lanier Library, and the Morton Reunion group.

In 2012, Al and Fran moved to Tryon Estates. Together they enjoyed introducing prospective and new residents to the many services and wonderful community life Tryon Estates offers.  Al enjoyed taking pictures of new residents for the community directory. Over the years, he also helped many of his fellow Tryon Estates residents preserve family memories by digitizing thousands of their old slides, pictures, and videos.

Al was a member of Tryon Presbyterian Church.  A memorial service will be held at the church on Saturday, October 1, 2022, at 3 PM, conducted by Rev. Dr. Allan Purtill, with a reception following the service.

Condolences to the family can be made to www.sandersfuneralandcremation.com.