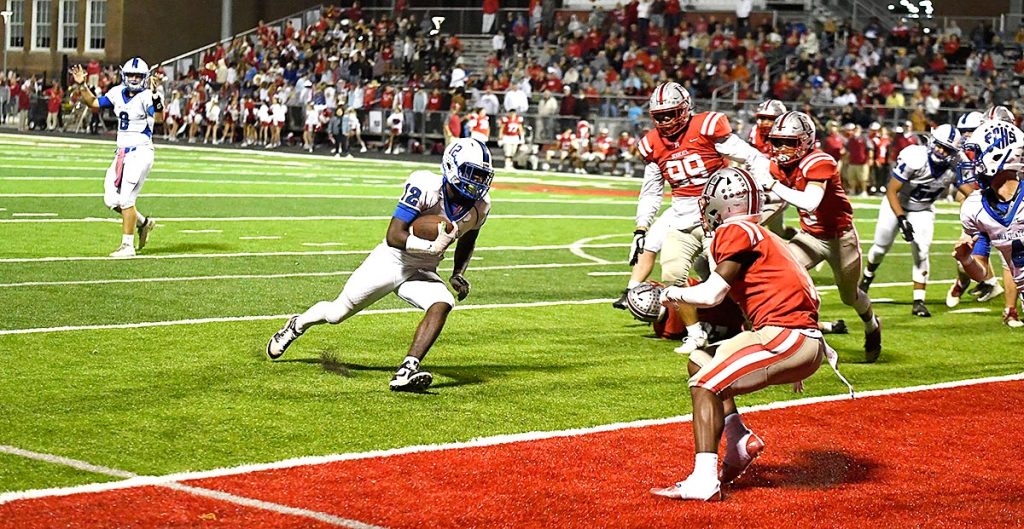 Perhaps avoiding the mistakes that plagued Polk County throughout its 32-21 loss Friday at Hendersonville would not have changed the final outcome. Perhaps the Bearcats’ speed and big-play ability would have proved the difference in the matchup of Mountain Foothills 7 Conference rivals.

But those miscues all happened, and they helped leave the Wolverines with a 3-3 overall record, 1-1 conference mark and one very frustrated head coach.

“We had plenty of chances,” said that coach, Bruce Ollis. “Way too many mental mistakes. We shot ourselves in the foot some. Our effort was good. Our effort was very good.

“We’ve just got to play smarter and eliminate some mistakes.”

Hendersonville had four touchdowns, all on plays of 20 or more yards; Ollis said defensive breakdowns directly led to two of those scores. A penalty largely stopped a Polk County drive late in the game that might have pulled the Wolverines within a score with time remaining for another.

Perhaps most painful of all, though, was a sequence of plays midway through the second quarter that changed the course of the first autumn evening of the season.

Trailing 8-0 in the second quarter, Polk County drove deep into Hendersonville territory, reaching the Bearcat 13. A holding penalty pushed Polk back outside the 20, and the Wolverines eventually faced a fourth-and-9 at the 12. Polk opted for a 29-yard Logan Nodine field goal attempt, but that kick sailed just wide.

The Wolverines stopped Hendersonville and forced a punt from the 15, only to see Lennard Benniefield, the upback in the punt formation, instead take the snap and race around right end for 21 yards and a first down. On the next play, Benniefield faked a handoff, ran to his right, stopped and lofted a pass down the sideline to burly tight end C.J. Landrum, largely alone near midfield. Landrum held off a pair of Polk defenders and completed the 64-yard catch-and-score, with Cooper King’s extra point giving Hendersonville a 15-0 lead with 4:30 remaining in the half.

“Giving up the fourth down on the punt, and then they score on the very next play, that was a huge mistake on our part around the fake,” Ollis said.

While being tackled by a Hendersonville offensive lineman, Polk County’s Jadyn Virgil takes down Bearcat quarterback Lennard Benniefield in the backfield

But say this for Polk’s small band of two-way warriors – they never quit.

The Wolverines answered Landrum’s score with a five-play, 69-yard scoring drive capped by Angus Weaver’s 7-yard touchdown run, cutting the deficit to 15-7. The Bearcats added a King 33-yard field goal just before the half for an 18-7 advantage at the break.

Benniefield scored on a 45-yard scramble midway through the third period, Landrum forced a fumble with a blind-side sack of Polk quarterback Casey Beiler and Hendersonville turned a first-and-36 following that turnover into another score as Benniefield tossed a short pass to Alijah Ferguson, who motored down the Bearcat sideline for 50 yards to the end zone. King’s extra point made it 32-7 with 3:09 left in the third.

Polk responded with a nine-play, 62-yard march, that ending on Karlen McEntyre’s 4-yard scoring run. Hendersonville opted to run a fake field goal on its next drive, with Beiler intercepting Rasheed’s pass, and the Wolverines took the turnover 89 yards for another score, that drive keyed by 21-yard Evan Jones and 44-yard Antonio Simpson catches and capped by Beiler’s 1-yard sneak. Nodine’s extra point made it 32-21 with 5:21 to go.

Jones then recovered Nodine’s bouncing onside kick at the 48, and Wolverines’ hopes of a miraculous rally grew. On fourth-and-inches at the Bearcat 43, Beiler again ran a sneak and powered inside the 40 for an apparent first down. But a procedure penalty negated that run, and an incompletion on fourth-and-6 ended Polk’s comeback dream.

“Our players continued to battle all the way to the end,” Ollis said. “We made it 32-21 and had a chance to maybe put it in and score again and make it real exciting.

“We’ve got some kids we need to get back and get back to good health. If that happens, we can still be a competitive football team and still have something to say about this conference. I am proud of this team and how we fought all the way to the end.”

Weaver finished the night with 209 yards on 21 carries, his third straight 200-yard effort and enough to push him past 4,000 yards for his career.

Polk County will look to rebound next Friday at R-S Central, traveling to face the Hilltoppers in a 7:30 p.m. kickoff.