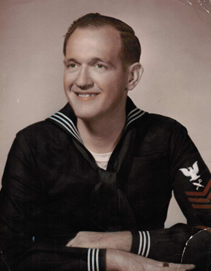 Columbus– Jesse Fred McKaig was born on October 28, 1926, in Polk County, North Carolina, to James Bryant McKaig and Kate Ross McKaig. At age 15 he enlisted in the United States Navy to fight in WWII. He served aboard the “Liberty Ships” during 1943-1944. He participated in the invasion of Normandy on D-Day and celebrated VE Day with his shipmates and the people of England. He was then stationed in San Francisco, to sail with the armada to invade Japan. After the Japanese surrendered, he returned home to Tryon, where he met and married the love of his life, Edith Roach McKaig. He would go on to serve in the Korean War aboard the USS Princeton CV 37, and during the Vietnam War, he served aboard the USS Northampton, which was the flagship for the Atlantic strike force and the “floating White House” to which the President could be evacuated.

Fred and Edith had three children and moved to Raleigh, where he worked as a Navy recruiter. Fred retired from the Navy in 1967 with the rank of E9 Master Chief Petty Officer, the highest enlisted rank for a sailor. He began a second career as vice president for Southeastern Sales Corporation, where he worked for another 25 years.

Fred lived a life of service to his family, church, neighbors, and friends. He was a kind, humble, and selfless man who, despite all the challenges and struggles, and sacrifices he faced in his life, never complained. His greatest joy was spending time with his family and watching his children play sports, pursue their interests, and grow into adulthood. He loved growing vegetables and cooking wonderful meals for his family. There was much joy and laughter at Sunday dinners after church. His deep and eternal love for his wife, Edith, was an inspiration and his selfless devotion to her continued even as the years wore on and time took its inevitable toll on their health. Up to age 94, with Edith’s health failing and memory vanishing, he remained steadfast by her side, serving not only as her partner and lifelong sweetheart but also as her caretaker, despite his own physical decline. When she peacefully passed away on September 28th, 2021, he was by her side. Now they are reunited for eternity.

Family visitation and a celebration of life will be held at Brown-Wynne Funeral Home, 1701 East Millbrook Road in Raleigh, NC, at 2:00 p.m. on September 8, 2022.

Burial will follow at Polk Memorial Gardens in Columbus, NC, where Edith Roach McKaig and Jesse Fred McKaig will be laid to rest. Military Honors will be provided by the Polk County Memorial Honor Guard.