Bruce Ollis sees a lot to like about this year’s Polk County football squad.

He just wishes there were a few more bodies in the picture to review.

“We’ve got some very talented players, particularly on the skill level,” Ollis said. “The difference between a lot of (2A) teams that we play than the teams we played in 1A is that those guys just play on one side of the ball.

“All of our really, really good players are two-way starters. We’ve done it here before that way, it’s just a little more difficult on the next level up because in some cases, you’re playing against teams that have 11 different starters on each side of the ball.

“We don’t use that as an excuse. We just tell our players we want to get you ready, we’ll try to spell you a little bit and we’ve got to get in tremendous physical and mental condition. We’ve worked hard during the summer and I think they’re prepared to do what they know is the inevitability of having maybe to play 48 minutes.”

Polk County will take its first step with its current roster on Friday, traveling to Newton-Conover for the 2022 season opener and the start of a season with much intrigue.

The Wolverines return nearly all of the offensive skill position players from last season’s 7-4 squad, with many of those players also bringing experience to the defensive side. How well those players are able to produce points and keep foes from doing the same, though, may depend on the development of Polk County’s offensive and defensive fronts.

There is some experience to be found in the lines. Offensively, seniors Reilly Yoder and Bryson Owen are expected to man the tackles, with seniors Gabe McGraw and Obed Najera at the guards. Junior Kole Powell will likely start at center.

“Obed Najera is the leader of that group, and then you throw Bryson in there and Reilly Yoder,” Ollis said. “Gabe’s going to have to play a lot more down inside. Kole’s playing center for us and he’s gotten much bigger and stronger, weighing about 230, and I think he’s full of confidence as a result.

“That’s a pretty solid core of guys. About three of those will turn around and play a lot on defense. But, again, we’re going to get mentally and physically prepared to do that.”

That group will block for a ground game that features senior Angus Weaver, on track to finish as Polk County’s all-time leading rusher, and sophomore Karlen McEntyre, who has had a solid preseason. Mackus Simpson and Vincent Twitty will also see time in the backfield, among others.

“I think you saw (at Polk’s first scrimmage) that Karlen is going to be an impact player offensively,” Ollis said. “That was exciting, to see him hit up in A or B gap and run hard and not worry about bouncing outside and try to outrun everybody. Get those tough yards between the tackles that you have to have to be successful in our program.” 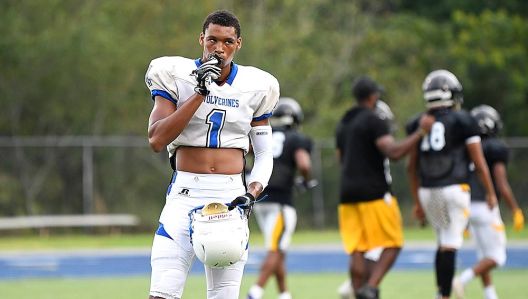 There is speed and big-play ability on the edges with juniors Antonio Simpson and Keaundrae Green. Senior Evan Jones has joined the team and offers an intriguing athletic receiving option, with Twitty and Lawson Carter also expected to be in the mix.

“We’ve got some home run capability with Antonio and with Keaundrae,” Ollis said. “They’ve got the ability to go the length of the field with a catch and run.”

Directing all of that talent will be senior quarterback Casey Beiler, who returns for his third season under center for the Wolverines. Beiler threw for almost 1,400 yards last season and has a good shot to surpass 3,000 yards for his career.

“Casey, we like to use the term that he’s cool as a moose back there,” Ollis said. “He enjoys throwing the football. He really throws it well. I think he’s become a better thinker about reading coverages and getting the ball to the open guy.

“One of the things that Casey and I have talked about, even last year, is that he doesn’t have to throw it 60 yards to score. He can throw it to Keaundrae or Tony or Angus or somebody else and they can catch it for eight and go for the next 52 because of their speed.” 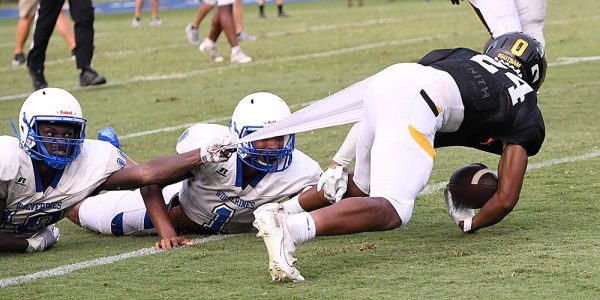 Weaver will anchor the defense at linebacker, with Jaden Chupp or Mackus Simpson likely joining Weaver. Simpson could also join Antonio Simpson on the edges, with Green, Twitty and Karlen McEntyre in the secondary.

Logan Nodine and Jones are expected to handle the kicking and punting duties.

“We’re flopping some of those same guys over, but the thing that experience lends itself to normally is confidence,” Ollis said. “If we hadn’t won some and played pretty well the past couple of years, maybe there wouldn’t be as much of that. But we’ve had a decent amount of success.

“I think these guys feel like we move up to another level and win a Mountain Foothills 7 Conference title. The first thing you want to do is go undefeated and then you want to be conference champs and then you want to win a state championship. I make no apologies for talking about being successful. If I wouldn’t speak that way to them and have high expectations for them, then they’ve got the wrong guy coaching the team.”

The MF7 will offer a competitive race once again. Chase returns standout running back Marquis McCombs, Hendersonville has a deep group of offensive returnees and those two teams will likely again sit in the top half of the conference. Polk County would love to join the team and vie for that elusive conference banner.

The schedule will test the Wolverines in that respect. After this week’s trip to Newton-Conover, Polk’s next four games are at home, including the league opener against Patton, before the Wolverines hit the road for games at Hendersonville, R-S Central and Chase. Polk closes with East Rutherford and Brevard at home.

“You have to play well on the road if you’re going to hang a banner, and that’s what we talk about,” Ollis said. “That’s the big deal, hanging a banner in the weight room that says conference champs.

“I do believe we’ll be in that mix and feel confident that our players will rise to the occasion and be a factor in the conference title race.”