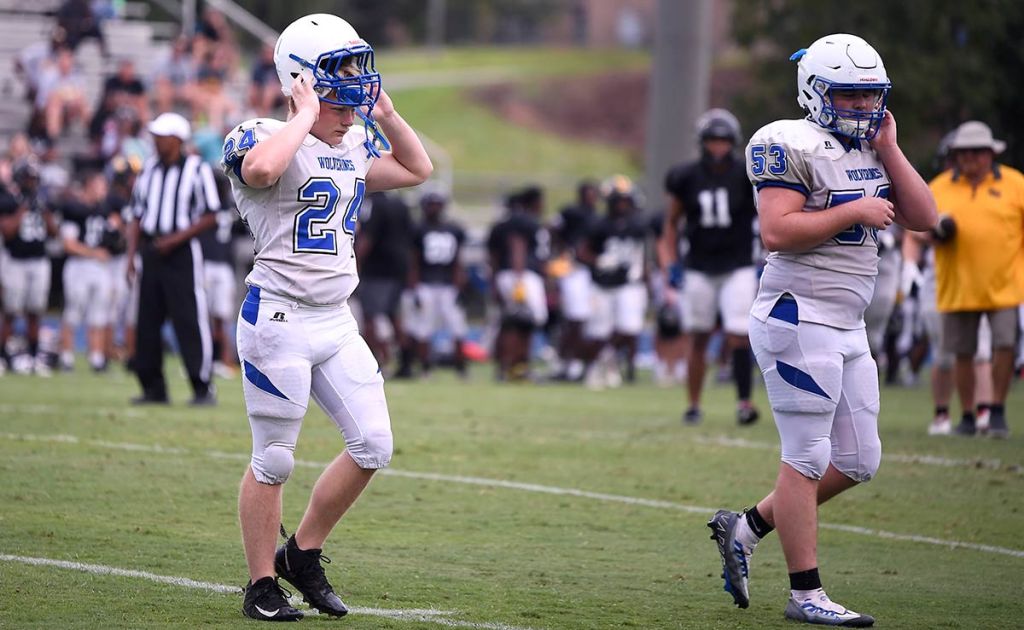 The three WNC teams combined for a 35-28 victory over their South Carolina foes on Saturday.

The three WNC teams – Polk County, Brevard and Owen – combined for a 35-28 victory over South Carolina foes Eastside, Blue Ridge and Landrum, a cumulative score kept in each of the three one-half matchups.

The Wolverines, who open the regular season Friday at Newton-Conover, faced Eastside in the opening half of the Showcase and earned a 14-14 tie thanks in large part to a pair of key defensive plays.

Mackus Simpson set up one Polk touchdown with an interception and Vincent Twitty returned another interception 46 yards for a touchdown to spark the Wolverines.

Twitty’s pick-six came with 4:42 left in the second quarter and, combined with Evan Jones’ extra point, gave Polk a 14-7 edge.

Eastside responded with a 10-play, 75-yard scoring drive, all of that on the ground. Junior Kalvin Banks keyed the drive, his 40-yard scamper on a third-and-four moving the Eagles into the red zone.

Banks scored from the one with 49 seconds remaining.

Banks, who rushed for 107 yards on 17 carries in the two quarters, also had a two-yard touchdown run late in the first period to give Eastside a 7-0 lead. Polk answered early in the second quarter after Simpson’s interception and return gave the Wolverines the ball at the Eastside 30.

On third-and-four, Angus Weaver plunged over the left side, spun away from would-be tacklers and raced toward the right sideline and the end zone, completing a 24-yard scoring jaunt. Jones’ point after made it 7-7 with 11:05 left in the quarter.

Twitty then gave Polk the upper hand with his interception, stepping in front of an Eagle receiver and racing past the Eastside bench and to the end zone.

Weaver rushed for 51 yards on six carries to lead the Polk offense.

Brevard and Blue Ridge each scored once in their battle before Owen grabbed a 35-21 lead on long touchdown runs by Kameron Moore and Alex Sanchez.

Landrum sophomore quarterback Titus Poore delivered a long touchdown pass late in the second quarter to cut the deficit to 35-28, but Owen stopped the Cardinals’ final drive and ran out the clock to secure the win.