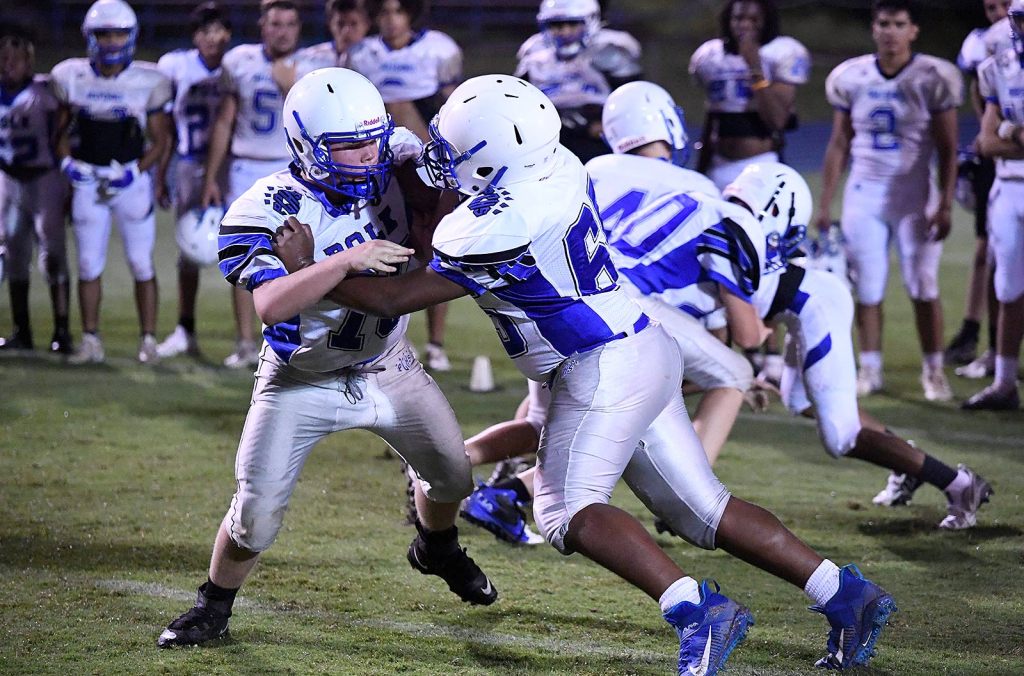 The Wolverines held their first full-contact practice at 12 a.m. on Saturday morning.

Polk County had an unexpected hero for its first full-contact practice of the 2022 football season – Lambert Ridings.

The Wolverines planned a return early Saturday morning to an old tradition, holding its first contact outing at midnight. North Carolina high school teams must complete five days of non-contact practices before being allowed to begin hitting on the sixth.

Polk County head coach Bruce Ollis slated Friday’s final non-contact session for the evening, with players then having a meal and bonding in the field house until midnight. But late-afternoon showers and thunderstorms pelted G.M. Tennant Stadium, meaning no one was setting foot on Miller Field as planned at 7 p.m.

But the Wolverines needed to practice Friday or else there would be no hitting at midnight.

This is where Ridings – Polk County Schools’ Transportation Director – saved the day.

“I’ve got to give Lambert Ridings some props,” Ollis said. “I was able to get a bus that we keep here. So we had a bus available to ride over and practice inside (at Tryon Elementary School).”

With preseason conditioning workouts completed and rain abating before 10 p.m., Polk County players stepped onto the field just after midnight and took part in a brisk 90-minute series of contact drills. The action finally wrapped up just before 1:40 a.m.

Seniors Angus Weaver and Casey Beiler approached Ollis with the idea to resurrect the late-night practice, and that duo along with many of Polk’s veteran players helped pace the Wolverines throughout the session.

“I saw some enthusiasm and really good effort,” Ollis said. “Our slogan is relentless effort, and I thought we gave some of that tonight.

“I thought we had a lot of energy. Tackling circuit went well. We’ve got some new guys who are new to football, and they still have a lot to learn. But more positive than negative, no doubt.”

Polk County will hold its first preseason scrimmage on Wednesday at 6 p.m., hosting East Henderson, Kings Mountain and perhaps a third team. The Wolverines will then face Eastside, S.C. on Saturday at 6 p.m. to kick off the Western North Carolina vs. Upstate South Carolina Border Showcase, with Brevard meeting Blue Ridge, S.C. at 7 p.m. and Owen facing Landrum at 8 p.m.

The Wolverines open the regular season on August 19 at Newton-Conover.