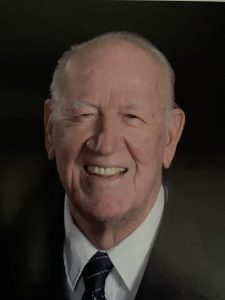 SALUDA — Gilbert Graham of Saluda, went home to be with the Lord, Saturday afternoon, December 4, 2021, at his home surrounded by his family.

Gilbert was a native Floridian who was born and raised in Miami.  He met Betty when he was 17 and she was 18.  One of his favorite stories is that he ‘lost’ a coin toss between going on a date with her sister Muriel or her!  By the time he revealed this to her many years later, it was evident that he was the real winner as they just celebrated 73 years together in June.  They raised a family of four in an idyllic beach town.  Church life was a very important part of his life—serving as a deacon, teaching a Sunday School class, singing in the choir, serving on many committees, including the grounds committee, an usher, and a camp counselor for summer camps, worked on and drove church buses, summer vacations in NC with his church family not only brought joy to him but gave him lifelong friendships.

After they raised their children, he and Betty moved to their Saluda, North Carolina Mountain home they had bought in 1973, living there while he built their dream home, mainly by himself. No plans, just from the dreams he and Betty had of what they needed in a mountain home that would accommodate all their friends and family that stayed there over the years. They quickly found a new church family at Saluda First Baptist, and he took up many of the same responsibilities he had in Miami at his new church in Saluda.

His love for his grandchildren was displayed by him and Betty taking all of them for two to 3 weeks in the summertime since he and Betty wanted the cousins to know each other—and they have all formed strong bonds to this day.  Some might say Gil had an additional motive as all the grandkids helped him with many chores around the farm. His 20 great-grandchildren also gave him great joy.

Gil could make anything and taught his children, and grandchildren much of the skills he knew up until his last days, things such as working on anything mechanical, planting and harvesting crops, scraping a road with his tractor, building swings, tables, and many other crafts in his workshop on the farm.

For many years, Gil and Betty wanted to take their 4 kids for 2 weeks to North Carolina and Tennessee camping with many of the other church families at Northwest Baptist, but couldn’t afford to buy a camper, so he made one by trading out things he needed with guys like Ollie Singleton, Harry Cumba, and many other great men, even picking up a discarded axle in the trash on his way home from work one day.

He and Betty continued their love of camping for many years after they moved to North Carolina joining many others that were part of the Sam’s Club camping group. At 76 he and Betty hooked up their travel trailer and camped all the way to Alaska and back, a lifelong dream for both.

In his final hours, he was encircled by his children, and he heard from many of his grandchildren and several of his great-grandchildren telling him that they loved him and what he meant to them.  His passing from this life was by hymn-singing, hand squeezes, hugs, soft words of love, and encouragement to give our love to those who have passed on before him.  He is greatly missed by the ones he left behind, but our lives are forever richer because of his influence and love.

Gilbert was preceded in death by his wife of 73 years, Betty Graham, his parents, Irwin Graham and Ellie Graham, and his great-granddaughter, Violet.

A celebration of Life will be held at 2:00 p.m., Saturday, May 14, 2022, at Saluda First Baptist Church with Reverend Tony Reese and Reverend Jeremy Warden officiating.

The family will receive friends prior to the service Saturday from 1:00 p.m. to 1:45 p.m. at the church.

Memorials may be made to his grandchildren serving in the mission field:     Angie and Joel Ballew/ Columbia SA:  Checks made out to South America Mission, in memo section reference:  Joel & Angel Ballew-10543  1021 Maxwell Mill Road, Suite B, Fort Mill, SC  29708  For online purposes:  www.southamericamission.org/donate/missionaries/ballew-Joel-and-angel/