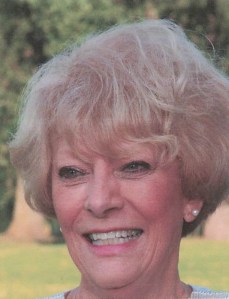 COLUMBUS–  Joan Mary Lea Mellberg (Nudelbacher), 90, of Columbus, NC & Menasha, WI passed away surrounded by loved ones, Friday evening, March 25, 2022, at Tryon Estates Medical Facility in Columbus, NC.  Joan battled several forms of cancer over the years as well as dementia in her later years.
Born February 10, 1932, in Appleton, WI, she was the daughter of the late Edward and Phyllis Jones Nudelbacher.  Joan was a graduate of Menasha High School (Class of 1950).  She married her first husband Jack (John) C. Lea on June 14, 1952, and enjoyed 55 amazing years with him before his passing in 2007.  Joan spent the first 8 years (1950-1958) of her career working for Jewelers Mutual Insurance Company as an Underwriter before joining Bergstrom Paper Company (P.H. Glatfelter Company) where she served as the Executive Secretary to the president for 34 years (1958-1992).  Joan also served as the Zoning Administrator for the Town of Vinland for 4 years (1993-1997) and owned and managed various Rental Properties in Neenah, WI for several years with Jack.
Joan was active in the community over the years with involvement in various organizations and associations including Partners in Profit Investment Club, Fox Valley Symphony League, Ridgeway Golf and Country Club, I-Ah-Maytah Lakeshore Property Owners Association, St. Mary Parish Adult Choir (Menasha, WI) and St. Mark’s Parish Adult Choir (Summerfield, FL).
Joan was a very kind and thoughtful lady who lived a great life.  She was very passionate about music and loved playing her Steinway Grand Piano and taking private lessons in her home as well as attending many live musical performances.  She also loved dancing, reading, cooking, baking, playing golf in WI and at her winter home in The Villages, FL, fishing on Lake Winnebago, and taking fishing trips to Canada with her friends.  Most of all Joan loved spending time with her family, especially her niece and nephews and their children in WI.
Following Jack’s passing in 2007 Joan found love again with Jim Mellberg “Cuddles”.  They married in August of 2011 and enjoyed spending time with family and friends between their homes in WI, NC, and FL.  In 2020 they sold their homes in NC and FL so they could split their time between Menasha, WI, and Tryon Estates where they enjoyed hiking, sightseeing, and “not having to cook”.
In addition to her parents, she was preceded in death by her first husband, Jack (John) C. Lea; two brothers, Richard Nudelbacher and Robert Nudelbacher; and two special nephews, Gregory Nudelbacher and Bradley Nudelbacher. Her survivors include her husband of 11 years, Jim Mellberg “Cuddles”, Columbus, NC; brother, Thomas Nudelbacher (Kathleen), Appleton, WI; niece (Joan’s God-daughter), Holly Nudelbacher-Schilz (Dan), Appleton, WI; nephew, Bryan Nudelbacher (Carlee), Appleton, WI; step-daughters, Diane King (Tony), San Jose, CA and Laura Nessmiller (Steven), Fairfax, VA; step-son, Eric Mellberg (Gail) Titusville, FL; step-grandchildren, Linda Nessmiller, Luke Nessmiller, Katie Nessmiller, and Bridget King; very special great-nieces and nephews, Jack Nudelbacher, Henry Nudelbacher, Jovee Nudelbacher, Grace Schilz and Ava Schilz; and special friends Wanda & Garry Spencer, Appleton, WI.
Funeral services will be held on Thursday, April 7, 2022, at St. Mary’s Catholic Church in Menasha, WI at 11:00 AM (528 2nd St, Menasha, WI 54952).  There will be a visitation at the church from 9:30 a.m. until the time of service.
The family would like to extend a special thank you to the caregivers at Tryon Estates in Columbus, NC for their exceptional care over the last few weeks.
In lieu of flowers, memorials may be made to the American Cancer Society or St. Mary Parish in Menasha, WI in the name of Joan M. Lea Mellberg.
Joan shared her friendly, open, and giving personality with everyone she met and touched the lives of those around her.  She will be remembered for her sweet sincerity, love of a clean house, passion for music of all kinds, warm smile, strong supportive spirit, and endless courage and hope.
An online guest register is available at mcfarlandfuneralchapel.com.