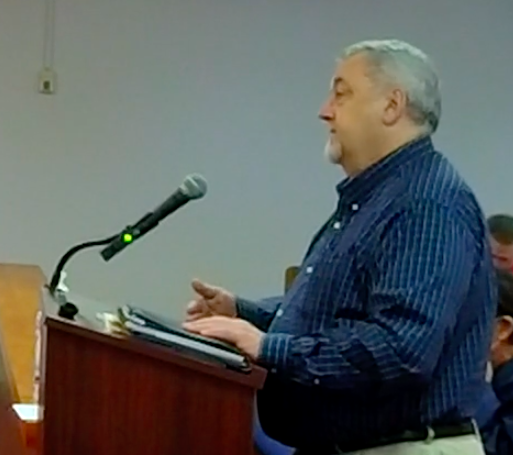 Michael Tanck spoke before the Board of Commissioners Monday night about a partnership between the county and Charter Communications that could allow more internet coverage in unserved areas.

Polk took an important step Monday night to further its goal of increasing broadband coverage in the county, and over half of Polk’s households could see coverage soon.

Polk County commissioners voted unanimously Monday, March 7 to proceed with a partnership with Charter Communications that would allow the company to apply for grant funds to deploy broadband internet to 3,500 addresses in unserved areas of the county.

Michael Tanck, director of government affairs for Charter, explained how the company will apply for funds from the state’s Growing Rural Economies with Access to Technology Grant Program (GREAT), which this year has $350 million available to disburse to rural areas across North Carolina.

Polk County would provide $250,000 in funding, and the state would match 50-70 percent, according to Tanck’s presentation to the board. Polk’s funds would come from money received as part of the American Rescue Plan.

“The benefit of this for residents of Polk County is with your $250,000 investment, you’re going to be leveraging the investments of Charter, the state and the federal government,” said Tanck. Other benefits include 200 Mbps standard service with 1 Gig available, reduced cost service for families that qualify, and a reliable network.

In looking at the map of unserved census blocks, Tanck says Charter identified 3,500 homes. These are in addition to the 1,350 locations already identified for broadband by the company in 2021 using a separate award process through the federal Rural Digital Opportunity Fund (RDOF), also made possible by the American Rescue Plan.

Polk County Manager Marche Pittman said that the census reports 9,071 homes in the county, and that if Charter can reach those 4,850 addresses, a little more than half of the county’s households will be covered.

“This will have a major significant impact. It may not cover every home that is unserved in the county, but this is going to take a big, big piece of that,” said Tanck.

Commissioner Paul Beiler asked when the award will be announced. Tanck responded that his best guess would be sometime in June or July, and that the roll out timeframe to reach households would be two years. Tanck added that if the grant is awarded, Charter will be able to move up the six-year timeframe of the RDOF grant.

“This is big,” said Chairman Tommy Melton. “A lot of people in Polk County are very happy. And we’re not going to stop here. This board is committed to bringing that to the citizens. They deserve it, we’re going to make sure they get it.”