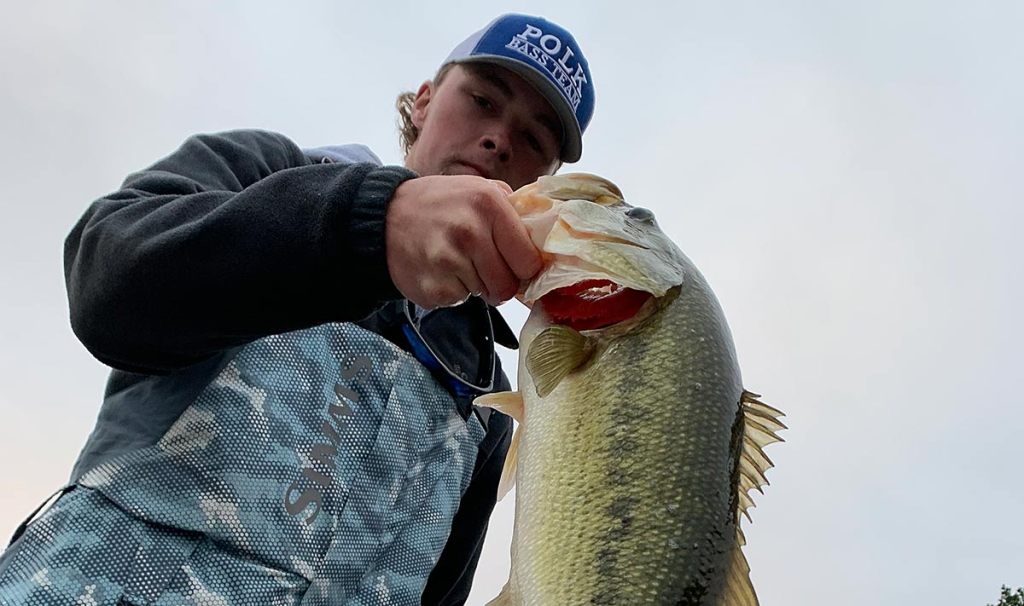 With no high school sports in the spring of 2020, Chan Barber felt very much a fish out of water.

His solution? Hop on the water and catch some fish.

Once there, a long-simmering idea surfaced.

“When I was a freshman, Hunter Hill, who is Coach (Molly) Hill’s husband, talked about how he started a fishing team at Appalachian State. He told me that we should start one here,” Barber said. “I just kind of never went with it.

“Then, when COVID hit, Dad got us a boat and me and (younger brother) Banks started fishing a lot and I’m like, you know, I think we should just start this up.”

Barber talked his father, Polk County High agriculture teacher Chauncey Barber, into sponsoring the team. Hill and PCHS alumnus Stephen Staley agreed to help mentor and get the team started. Chan Barber put together a presentation and delivered that to the Polk County Board of Education for its approval.

The result is the latest Wolverine competitive squad, the Polk County Bass Fishing Team. The program took part in five tournaments in its fledgling season of 2020-21 and expects to compete in a full series of events during the current school year.

Barber and his younger brother, Banks, have already won one event, a Palmetto Boat Center Tournament Trail event in September. The team fielded two competitive boats for the first time at a tournament on Lake Hartwell in December, with Karsyn Huskey joining the Barbers. Almost two dozen PCHS students have expressed interest in the program.

All of that from an idea that took a pandemic to provide a spark.

“If it wasn’t for COVID, we probably wouldn’t have done this, to be honest,” Chan Barber said.

Being outdoors wasn’t anything new for the Barbers, who have all hunted and fished most of their lives. But learning about the life – and lifestyles – of competitive fishing programs has been an eye-opening experience.

Polk’s team has hit the water much more modestly equipped than some of the competitors from schools such as Dorman, Byrnes and Chapman against whom the Wolverines regularly compete, though the program has gotten sponsorship from local businesses such as The Gorge, Ruff Logging, Michael Champion Construction, Stott’s Ford, Mitch Contracting, Epperson Tree and North Carolina Farm Bureau insurance agent Kamron Kerr. But that hasn’t slowed interest in the team and the program’s hopes for growth.

“We’re going to do some fun stuff, like pond fishing,” Chauncey Barber said. “Trout season opens in the spring, take them out there. We want to take students to a fish hatchery. Some of them, they’ve not asked to fish competitively and some of them don’t want to. Some of them might not have the time and we definitely don’t have the resources, but those that can, it’s great.

Ah, those early-morning wakeup calls, which Chan Barber says is the “worst part” about competition. Tournaments typically begin as early as 7 a.m., with competitors being sent out onto lakes in waves. At one recent event, the early-morning launch was followed by more than two hours of a weather delay.

“You go out there, you let your boat off at the ramp and you wait till blast off and you can end up like us and sit there for two and a half hours on a fog delay,” Chan Barber said. “So it can be seven o’clock, you sit there for two and a half hours like we did all day and you’re just miserable and you don’t know what you’re gonna expect. You can go four hours without catching a fish. Or we’re gonna catch all our fish the first five minutes.”

The tournament format is typically a simple one – try to catch the five largest fish possible. Fish have to be at least 12-14 inches at most tournament, and competitors have a certain amount of time during which to try to land their five prize catches.

Each boat typically has two competitors and a captain, an adult there primarily to serve as the boat’s driver.

Finding adults who can dedicate the time to serve as captain, including the six hours or so on the water, plus have a boat is one of Polk’s largest obstacles to fielding more competitive entries.

“We’re gonna try to put probably try to put at least maybe two more boats out on the water,” Chauncey Barber said. “The challenge is when the kids are out there, the adult stays in the boat or drives the boat, but the kids have to be in charge of running the trolling motor. There has to be one of them running the trolling motor and fishing and there’s another one in the back.”

“They can alternate, whoever’s more confident,” Chan Barber said. “There’s not like a set person that you assign, but you’ve got to have the adult that is the captain. We don’t drive or anything. We just run the trolling motor and kind of show where to go.”

As a Polk County High student, Chan Barber has taken part in five different sports – baseball, basketball, football, cross country and track. But he said none of those compare to the dynamics of being on a boat, on a lake, for six hours.

“This is a different type of competition,” he said. “You can’t really talk junk to anyone or anything. There’s not an atmosphere between the other people. You’re just wondering what they’re doing. There’s nobody around you, really. It’s just you. Me and Banks are kind of secluded from everybody, so you kind of get to chill.

“And it’s one of the hardest ones. I played a bunch of sports and sitting out there on the boat all day in the heat for eight hours or six hours, whatever it is, is rough. I get so tired by the end of the day, like my legs just start hurting from standing for so long and it gets pretty fatiguing.”

Despite the early wakeup calls and the demands of being on the water all day, Chan Barber said he is hooked on the sport. Perhaps not enough to alter his college plans to pursue a scholarship – yes, some colleges now offer scholarships for their competitive bass fishing teams – but definitely enough to keep competing for the remainder of his senior year and possibly beyond.

Polk County Bass Fishing is scheduled to next compete in a tournament at Lake Keowee on January 22.