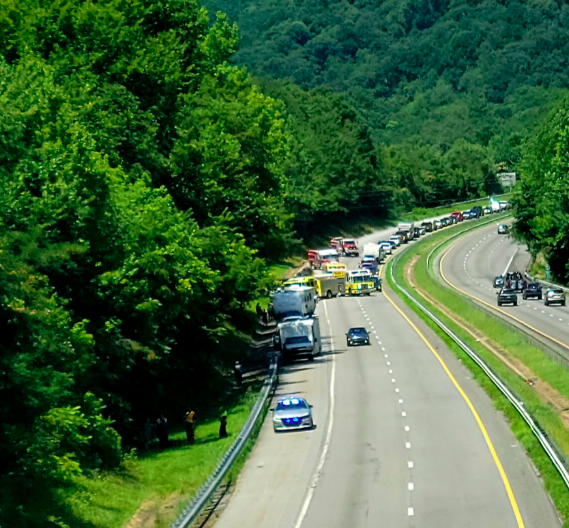 Interstate 26 East saw traffic delays again on Sunday when a truck and trailer wrecked and emergency crews rescued an entrapped person. Pictured is a view of the traffic from the Columbus exit. (Photo by Ansley Campbell)

COLUMBUS—Interstate 26 East was backed up again on Sunday from a truck and
trailer that wrecked near Columbus.
The Polk County Sheriff’s Office alerted the public that the accident occurred at the
bottom of Saluda Grade and there was an entrapment. Local fire departments, EMS
and rescue personnel worked and got the road back open in the afternoon.
There was one lane shut down on Interstate 26 for a few hours and traffic was
backed up between Columbus and Saluda.
There were no reports on the injuries as of press time.
Traffic issues along Interstate 26 are becoming more common. There have been
several accidents lately that have caused heavy traffic or lanes to be shut down.
A few weeks ago a tractor-trailer accident shut down the interstate on the west
bound side. The tractor-trailer was carrying wood chips, flipped over the guardrail
and blocked both lanes of traffic at the 64-mile marker.
On June 4 a tractor-trailer flipped and caused traffic to be backed up to the Landrum
exit as well as along U.S. 74 with drivers trying to access Interstate 26 westbound.