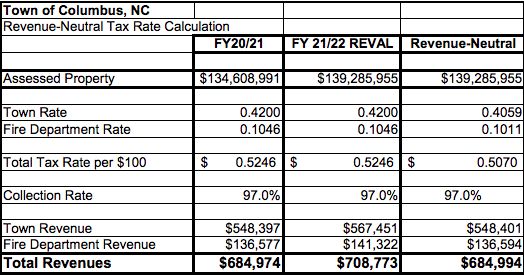 COLUMBUS—The Town of Columbus is proposing to not go revenue neutral with its budget, but by doing so the town will only receive $23,799 in extra revenue next year.

Columbus will hold its public hearing on the proposed budget at 6 p.m. on Thursday at Columbus Town Hall.

The county did a property revaluation this year, which increased property values.

Columbus is also proposing a 15 percent increase in pay to its police officers next fiscal year.

“The major item added to the police department is an approximate 15 percent increase in salaries for officers,” states the budget proposal message. “This increase in salaries is an attempt to stay competitive with surrounding agencies. There is also $3,000 included for the K-9 program.”

Each councilman set their each goals, with councilman Robert Williamson saying he wanted no tax or water/sewer rate increases, to explore the option of contracting town landscaping needs, improved maintenance of assets likes sidewalks, lines and valves, construction of a shed for brush truck protection and to construct and maintain a list of active projects from all departments (accountability measure); councilman Mark Phillips saying he wanted the development of a stand-alone ABC store instead of renting and Mayor Pat McCool said he would like to assess water needs and ensure adequate flow available for current needs and future growth.

“Staff believes this proposed balanced budget actively meets the town’s needs and addresses many of the issues that were mentioned at the budget retreat in March,” states the manager’s proposal. “We have actively strived to create a budget that is workable and respectable to those citizens and customers we serve by finding the most cost effective way to provide services. Our hope is that this budget message and the proposed revenues and expenditures help you make an informed decision for next year.”

Columbus increased its taxes 5 cents for the current fiscal year.

The full budget proposal can be found on the town’s website at columbusnc.com under the town government tab.