How to get the vaccine 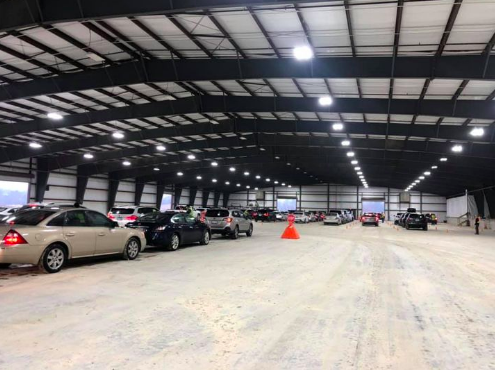 The weather did not stop Polk County health officials from giving out more than 1,600 COVID-19 vaccines. The county has begun giving out vaccines starting at 7 a.m. to accommodate people who may be working during normal business hours. The health director has responded to questions regarding the elderly who are having trouble getting on the list. (Photo by Polk County Division of Public Health)

Some elderly people having issues getting on the list

MILL SPRING—There’s no question once people get on Polk County’s list to get a COVID-19 vaccine and make it to the Tryon International Equestrian Center that the process is smooth as silk.

But some elderly people have contacted the Bulletin saying they are having issues getting on the list because they are not capable of filling out the survey, do not have transportation or do not have Internet.

Sandy Clark, of Columbus, said a friend of hers, in her 90s, had been trying since December to get on the list. The first survey the woman did not sign her name so the survey was thrown out, Clark said, then the lady did 2 more and made mistakes. Calls to the county number would say the mailbox was full and once she got a call back all her information was taken and she got an email saying her application was accepted but never got another response.

Finally, the fourth attempt Clark filled out the survey for the woman and she has since gotten her first vaccine.

“Once you go to get your vaccine, it’s very efficient,” Clark said.

She said her concern is that there are many elderly people in the county who are having trouble getting on the list. There are others who may not have transportation once they get on the list.

Kennedy urged people to call the message line at 828-722-5086. Someone will call you back and they can sign people up over the phone if needed. The county has several agencies working on returning calls from the message line.

Polk County has given out more than 1,600 vaccines just this week on Wednesday and Thursday. On Thursday, the county had at one point about 100 vaccines left over and sent out alerts for people to come with no appointment ages 18 and over between 3-4 p.m. to receive the leftovers on a first come, first serve basis.

To fill out a survey, or for more information about the vaccine or testing, people can visit polknc.org and click on the COVID-19 information tab.