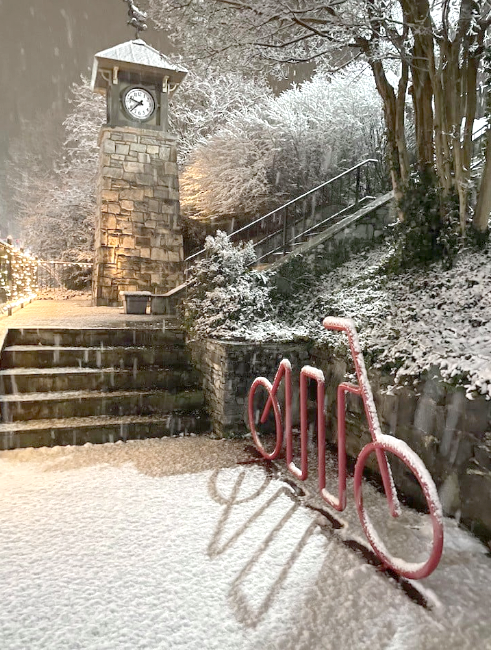 The Foothills area was blanketed with its first snow of the year late Saturday. Most of the area reported 2-4 inches of snow. The snow was melted by Sunday afternoon in most areas as temperatures rose above freezing. The National Weather Service reported that Tryon received 2.5 inches of snow. (Photo by the Tryon Downtown Development Association)

FOOTHILLS—Most of the foothills area saw its first snow flakes over the weekend of the year.

Most of the area reported seeing between 2-4 inches of snow, that started around 9 p.m. Saturday in most areas and ended early Sunday morning.

Road conditions were bad for the first couple of hours as the snow, which was mixed with some sleet, quickly began sticking.

The National Weather Service reports that Tryon received 2.5 inches of snow Saturday night. Other areas received more, including Saluda and other areas of the county.

The snow did not last long and was the first of the year. Most of the snow was melted by Sunday and roads were clear by Sunday morning.

There were some trees down throughout the county and some areas did lose power.

So far the month of February has received only 1.06 inches of rain and the 2.5 inches of snow, according to the NWS.

The month of January saw no snow this year and 3.49 inches of rain, which was under the normal of 5.10 inches of rain for the month, according to the NWS.

Rain is forecast to hit the area on Thursday, but temperatures are expected to remain above freezing.

New K9 on the job