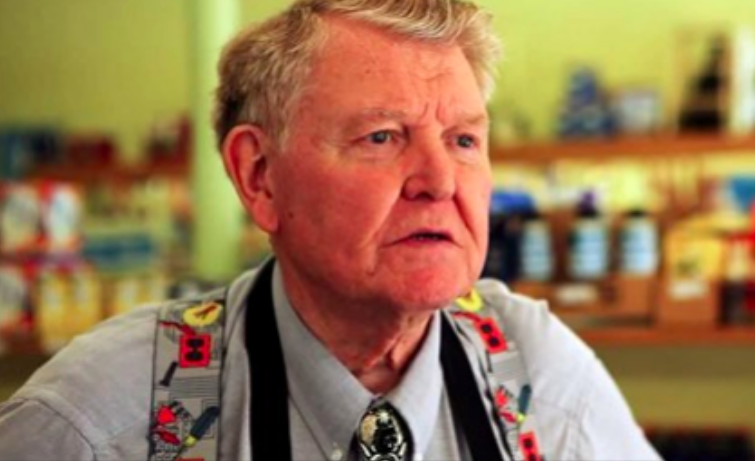 TRYON—Tryon has lost another historical legend.

Cowan was known for many things, including his owning of Cowan’s Grocery and Hardware Store, as the Tryon Fire Chief and spending decades on both the Tryon City School Board and the Polk County School Board. Anyone who knew him heard his famous train whistle that no one else could replicate.

Tryon Town Manager Zach Ollis said every strong and vibrant community needs to build off of certain cornerstones and Cowan was one of Tryon’s. He led the fire department with courage, selflessness and compassion for years, Ollis sad.

“His leadership is still admired to this day and the wisdom we learned from Mr. Cowan is passed down to our members,” Ollis said.

Ollis said personally, he will never forget a conversation he has with Mr. Cowan at the funeral of Cowan’s grandson, fire chief Tank Waters last year.

“Even in the face of true chaos and sadness, I only saw strength,” Ollis said. “Mr. Cowan was a stoic and indestructible leader for his family. He held firm for them and showed them how to get through the tough times. I took some time to reflect this week about the Cowan family and the hurt they must have. Men like Mr. Cowan are rare. The light he leaves behind will light our path for many years to come. For that, we are grateful.”

Tryon Mayor Alan Peoples said he moved here in 1979 and back then people would come to your home to welcome you and Cowan was one of the first people he met.

“I’m pretty sure the first day I met him he did the train whistle for me,” the mayor said.

Peoples said he bought an old house and it never failed when he needed something he could not find anywhere else, Cowan would find it in the back.

He said most of the history of Tryon was in 3 heads, including Cowan, the late Jim Jackson and the late James Payne.

Cowan’s father was once the mayor of Tryon. Peoples said he does not know know anybody that did not know Cowan. He would deliver your groceries if you needed it, Peoples said.

“That family was a mark left on this town that will always be here,” Peoples said. “Those three guys (Cowan, Jackson and Payne) were like gentle giants.”

He said Cowan was a lifelong supporter of our local schools and a believer in the merits of education.

“Mr. Jim Cowan loved children and gave willingly and tirelessly to serve and support them,” Greene said. “In addition to his significant role as a 20-year board of education member, Mr. Cowan did many things behind the scenes to better the lives of young people in Polk County. I a student or school needed something he would provide it or work to get it. He enjoyed visiting schools, and kids would rush to him and ask to hear his signature train whistle imitation. It was clear to all who knew him that Mr. Cowan loved young people and advocated for them every day.”

Greene said Cowan always put students at the center of every stance and decision he made on the board. He offered calm and wisdom when it was needed most, Greene said.

Greene said he remembers discussions when Cowan would listen, think and then offer a very simple but profound comment that brought everyone’s focus back to students.

“He will be remembered as a strong, humble, quiet force, a man who lived the golden rule-treating others with kindness, respect and dignity no matter who they were or where they came from,” Greene said. “We will also remember Mr. Cowan’s smile and sense of humor. He seemed to have a knack for putting others in a good mood with a funny quip or beaming smile. Tryon and Polk County are fortunate Mr. Cowan shared so much of himself with us and bettered our lives in many ways. His example continues to teach us all that working hard, valuing people and giving of yourself and your resources benefits others. His legacy lives on in the lives he touched.”

Ollis said the Town of Tryon staff, the Tryon Fire Department and the community as a whole want to give the Cowan family their condolences.

“The only thing I can say is that if we are half as good a person as Mr. Cowan was, we will get to hear his train whistle again one day,” Ollis said.