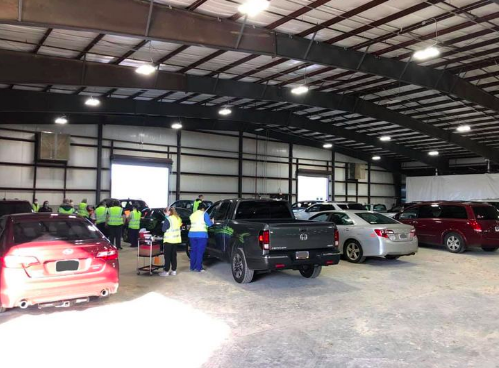 Week 2 of vaccines begins next week

265 COVID-19 vaccines distributed in week one

COLUMBUS—Polk County is gearing up to begin its second week of COVID-19 vaccines.

The Polk County Board of Commissioners met Monday and heard from Polk County Health and Human Services Agency Director Joshua Kennedy about the vaccinations so far.

Kennedy said there were 265 vaccines distributed in week one and the county has received 1,500 vaccines.

The county’s survey regarding vaccines has been answered by 3,070 people, Kennedy said.

There are about 450 appointments scheduled for the next week for people to get vaccines, with Kennedy estimating that about 550 of will receive a vaccine by next Wednesday.

Kennedy told commissioners how fortunate Polk County is to have so many community partners helping with the testing and now vaccines with their time and personnel, from St. Luke’s and other health partners to the Tryon International Equestrian Center, where the first round was administered following healthcare workers. Kennedy said they administered 100 vaccines in 4 hours at TIEC and there is another one scheduled at TIEC for 350 plus people. He thanked all the volunteers for their help, including people volunteering to answer phone calls.

Kennedy said of the 1,500 vaccines received, the county had about 18 percent out the door in the first week and by next week he thinks they will have about 35 percent complete.

The vaccine portion is called Operation Warp Speed, with Kennedy saying a huge part of it will be trying to manage bringing everyone back in for a second dose.

He said it will be April through June when the vaccines will be available to pharmacies and doctor’s offices and he anticipates the vaccines to be a year-long process.

Commissioner Myron Yoder thanked Kennedy for his comprehensive presentation and said the vaccine is one of the solutions, “to get beyond and live with the COVID-19.”

“I know what you are up against and appreciate all your hard work,” Yoder told Kennedy.

County manager Marche Pittman asked Kennedy to touch on the county’s plan of moving more towards vaccinations instead of testing.

Kennedy said they are doing vaccinations weekly. He said the first event at TIEC there were over 40 volunteers.

“We need to really focus in on moving as fast as we can,” Kennedy said.

Polk residents interested in scheduling an appointment when their distribution phase is open are encouraged to visit the county’s COVID-19 information page at polknc.org or calling the COVID-19 message line at 828-722-5086. As the phases open to the public, Polk HHSA will connect residents with vaccine access sites.

Over the next several issues, we will publish our annual look back at some of the top stories, newsmakers and... read more