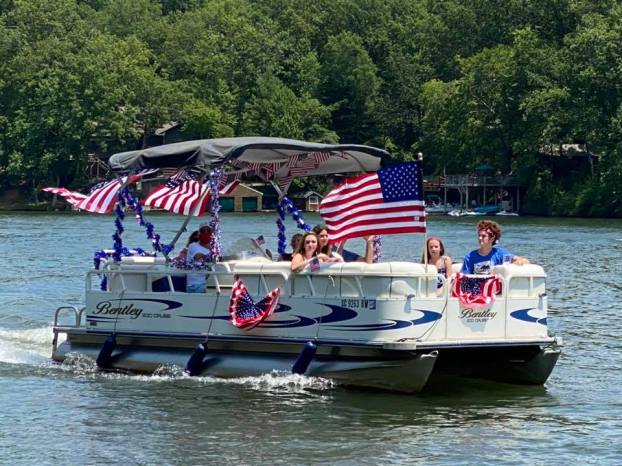 The Year in Review – July

published in the Bulletin in July.

The Bulletin asked Polk County Health and Human Service Director Joshua Kennedy and St. Luke’s Hospital CEO Michelle Fortune why the county is not releasing information on how many COVID-19 patients are hospitalized, how many St. Luke’s Hospital employees have tested positive for the virus and their response on Polk County Sheriff Tim Wright releasing a statement that his office will not enforce the governor’s latest executive order that masks are required in public.

Kennedys said regarding face coverings, the guidance from the Centers for Disease Control and the associated studies on the effectiveness indicate they are one of several important strategies that when used in combination with other strategies, such as social distancing and hand hygiene will result in the desired outcome of reduced risk in transmission.

COLUMBUS—The Town of Columbus is considering an ordinance to regulate outdoor gatherings.

Columbus Town Council met last week and discussed the proposal. Council decided to refer the drafting of an ordinance to the town attorney. Council plans to consider the draft during its July meeting and present the draft to county officials.

Councilman Mark Phillips said that the proposed ordinance would apply to any large outdoor gathering, including assemblies, festivals or parades.

TRYON—The Town of Tryon has secured an engineer to design repairs for sinkholes along Carolina Drive and Chestnut Street.

Tryon Town Manager Zach Ollis said this week the repairs will require a new set of 60-inch pipes to be installed from Woodland Park, on Chestnut Street, to the river underneath Carolina Drive.

The sinkholes occurred following heavy rains a couple of weeks ago. Both roads are currently blocked because of the holes, with detours for both roads in place.

Local officials noticed graffiti painted along New Market Road outside Tryon Sunday morning. The road is in the county, but owned by the North Carolina Department of Transportation. Tryon officials contacted the state and state officials removed the graffiti by Monday morning by covering it with dirt and sand.

LAKE LANIER—This year’s annual boat parade to celebrate the 4th of July brought one of the biggest participations in history with 20 boats registering.

This year’s event, held on the lake Saturday afternoon, was in memory of former Captain Bill Jones, who passed away July 3, 2019.

Lake families decorate their boats in red, white and blue, meet at the Tea House dock and parade around the lake’s 3 basins twice. Judges were equipped with numbered paddles to determine the winners. This year, the Jensen family took first prize, the Williams family took second prize, the Campbell family took third prize and the Rogers family took fourth prize.

The surveys are available to all Polk County youth.

The purpose of the surveys is for the coalition to gain data on the community as a whole. The surveys are not intended to punish or bring focus to the actions or behaviors of any single individual or family.

TRYON—A Polk County man was recently sentenced to 99 months in prison for arson and assault on a female, according to the office of District Attorney Greg Newman.

Meko Lockee, of 411 Hugh Champion Rd., Tryon, pleading guilty to arson, breaking and entering and assault on a female, according to Newman. The plea was done during Henderson County Superior Court held on July 1-2.

Lockee was arrested by the Polk County Sheriff’s Office in January this year after local fire departments responded to a fire at 411 Hugh Champion Rd., which is near Columbus.

Despite many unknowns created by the COVID-19 pandemic, Polk County Schools has been working diligently to prepare for the 2020-2021 school year. I wanted to provide a brief update to our students and families about what we know at this point and how we are planning for students to return on August 17.

There is still a great deal of uncertainty regarding how the school year will open and what rules and guidelines will be in place for students and school districts. The current rules and guidelines issued by North Carolina Department of Health and Human Services, the State Board of Education and the Department of Public Instruction continue to be changed and modified.

As of Friday afternoon, the North Carolina Department of Health and Human Services had Polk’s count at 93 cases. Those cases have been since the first case reported on March 26 this year. There have been more than 50 of those cases presumed recovered and 4 people have died in Polk County from the virus.

Of Polk County’s cases, 30 have been reported in the Tryon zip code; 25 in the Columbus zip code; 24 in the Saluda zip code (including all 4 deaths) and 17 in the Mill Spring zip code, according to the NCDHHS.

CAMPOBELLO—A Campobello man died on July 5 while hiking at the Pisgah National Forest.

Robert James Frye, 54, of Campobello, was hiking with a friend in the Balsam Grove area on the border of the Pisgah and Nantahala national forests when he died, according to Transylvania County Sheriff David Mahoney.

Mahoney said it appears Frye died from natural causes as he had some medical issues while hiking. Frye died on the scene.

Talbert was transported to Spartanburg following a single vehicle crash that occurred at approximately 4 p.m. Sunday along Highway 9 South in Polk County, according to Clavenger.

The Columbus Fire Department was one of the departments to assist the Mill Spring Fire Department on the call. The fire burned a van near the Lake Adger dam and was at one point threatening a structure.

Highway 9 was closed for some time but reopened once the fire was extinguished. No injuries were reported or structures damaged except the vehicle.

MILL SPRING—After being foreclosed and closed for a while, Bright’s Creek Development is reopening under new ownership.

Bright’s Creek, located in Mill Spring, announced this week it will reopen soon.

Bright’s Creek Partners LLC entered into a purchase agreement with Mill Spring Resort LLC to purchase the development in the spring. The closing date was scheduled for May 29.

Bright’s Creek Partners LLC is owned by Frank Blythe, Mark Lampert and Ed Garcia, who are all homeowners in Bright’s Creek. The owners said earlier this year they will begin the recovery of the golf course with an opening date sometime this summer.

LANDRUM—The City of Landrum considered an ordinance to require masks in public but the majority of council members were not in favor.

Briggs said at the time there were 51 cities in the state who were requiring masks in public.

Councilman Billy Inman said it is not his job to tell people they cannot smoke and was not in favor.

There will be a public meeting at 6:30 on July 30 at the Green Creek Headquarters, located at 8645 NC 9 South to discuss the building.

Green Creek Fire Chief Jeremy Gregg said the purpose of the 3rd fire station is to save homeowners on their insurance since Green Creek is currently an ISO class 6. He said people need to live within 5 miles of a station in order to get a lower ISO rating, which means lower homeowners insurance.

COLUMBUS—This summer has been a little different with the local Feed A Kid program but has included more fresh fruits and vegetables from local farmers.

Local churches and the Thermal Belt Outreach Ministry partner in the summer to feed families through summer vacation. This year has included drop off points at elementary schools instead of deliveries and packing with volunteers wearing masks.

There are 6 local churches who partner to fund the program and Outreach provides resources, including food purchases and the facilities to pack the food.

POLK COUNTY—As of Friday, Polk County had a total of 132 cases of COVID-19, according to the North Carolina Department of Health and Human Services.

The county remained at 5 deaths, with 4 of the deaths being from the Saluda zip code and 1 death being from the Tryon zip code, according to the NCDHHS.

The county picked up 4 cases of the virus this week, with the county reporting 128 total cases last Friday.

COLUMBUS—A positive case of COVID-19 at the Womack building in Columbus has caused the county offices to be shut down until further notice.

County officials alerted the public of the closure Thursday afternoon.

County officials said they closed the offices to the public until further notice based on recommendations by public health officials.

The Year in Review – June

Over the next several issues, we will publish our annual look back at some of the top stories, newsmakers and... read more