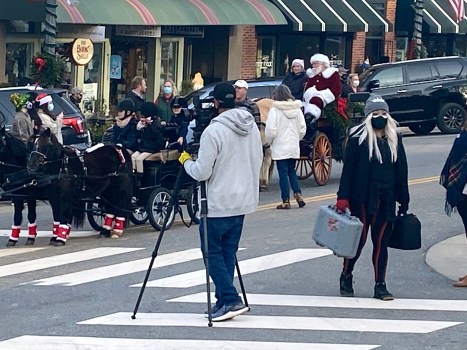 Christmas movie being filmed in Tryon

Tryon had its usual Christmas parade on Trade Street. Actually, there were two Christmas parades this year. The second one, however, which came through on Friday, Dec. 18, will be seen on a much grander scale as it will be part of a movie being filmed.

In front of Morris the Horse in the middle of the intersection, actors Bo Yokely and Kate Dailey––the main characters in the movie––performed for the cameras. Many onlookers came from out of town to appear as extras in the film, and many were there to enjoy both the parade and the making of a movie.

The title of the movie being filmed is “Christmas at Gray Hound Inn,” written by Vickie Vass of the Tigerville area and directed and produced by Sueanne Taylor from Atlanta. The film is expected to premiere on television on November 21, 2021.

Dailey says, “The movie is pretty much about a girl who comes to Tryon from a big city and just falls in love with this small town. And the people here are so great to work with.”

Kate Dailey plays character Charlotte Quinn. Bo Yokely stars as character Cole Tooley as the romantic love interest.
Yokely adds, “Tryon is a great place to film this, and we say the name of this town a lot, so it’s very evident we’re in Tryon filming.”
Beau Menetre, co-founder of the International Tryon Film Festival, says on behalf of the Film Festival that they are here to support those involved with the Christmas movie in any way they can.
“I just want to say how valuable it is to have a production like this shot in Tryon,” says Menetre.  “I think it’ll create a lot of value for the community itself. Whether it goes on to become a Hallmark film or an independent production, they wanted to name the town in the movie ‘Tryon,’ so a lot of people will come to Tryon as a destination to see the landmarks from the movie, I believe.”
The film crew shot scenes in Ashley Menetre’s shop, The Nest Artisan Market on Trade Street, where actors Yokely and Dailey claimed to have fallen in love with the town of Tryon.

Dailey says, “This whole town is beautiful. It’s like stepping into the real-life version of this movie. We’re thrilled to be here.”

After the holidays, the film crew is expected back in Tryon to continue filming in January.