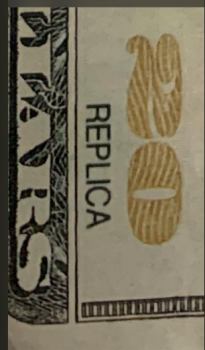 LANDRUM—The Landrum Police Department sent out an alert last week that they have been seeing counterfeit bills circulating.

The police department said there have been numerous incidents of counterfeit bills, including $50 bills and $20 bills.

The department is asking people to be vigilant in accepting any cash transactions.

Some of the bills the department showed said the word “Replica” on them.

Many stores have counterfeit detectors but for those who do not, there are ways to detect a counterfeit bill.

Bills have a security strip that can only be seen when a light source is behind the bill. For the $50 bill, the strip is located to the right of Grant and crosses underneath the left leg of the “U” in United.

Also on the $50 bill, a hologram image of Grant will appear on the front/right side of the bill when holding the bill to a light. If the image is not visible without the light source behind it, the bill is counterfeit.

The “50” on the bottom/right corner of the bill is also made with color shifting ink, so tilting the bill in different directions will make the color change.