Textiles in the Carolinas 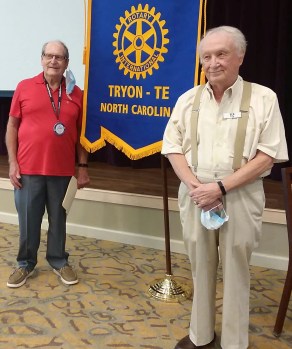 The Tryon Estates Rotarians were privileged to have a presentation at their August 3rd meeting on the rise and fall of the textile industry in the Carolinas by retired senior textile executive Ben Fox.

The textile industry has had a major influence in our area for over a hundred years. The early mills were built in the late eighteen hundreds after investors decided the South offered a ready source of cheap labor.

During the period from 1880 to 1910, 28 mills were built in Spartanburg County alone. Most of the facilities were built on farmlands or cotton fields, preferably close to a river.

The assumption that there was an abundance of cheap labor proved to be a fallacy and the entrepreneurs had to often recruit workers from outside the local area. The early plants were very labor-intensive as the mill owners found it necessary to build housing and other community facilities for the workers which included schools, company stores and medical facilities.

Many of the mills became stand-alone communities. The industry grew steadily overtime, easily surviving the challenges of the great depression and World War II.

During the 1940s and 50s, the textile industry grew and expanded in area from Alabama across the Carolinas to Virginia.

During the 1950s and 60s it became the textile capital of the world as the industry became more automated and less labor-intensive. By 1961, it was responsible for 90% of the nation’s total textile production. The industry’s production shifted overseas significantly due to a variety of reasons during the 1980s and 90s.

By the early part of this century it had essentially met its end in the Carolinas.