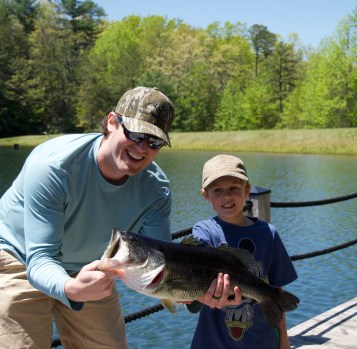 From late April into early May, we are in close proximity to a pond. We aren’t picky with ponds. Neighborhood, farm, or retention, the only requirement is that in contains eager fish. For the most part, the size of the fish does not matter to us. Instead we focus on quantity to keep our kids’ attention. But this weekend at a neighborhood pond, I was able to teach my son some valuable lessons involving big bass.

The first lesson was how to approach a five pound bass. To our surprise, a large bass was posted up like a lifeguard watching the little fish swim. The little fish were attracted by another family’s children tossing bread off the dock. My son and I slowly crept on the bank out of sight of the largemouth and delicately dropped a plastic worm and worked it by the bass. The bass paid no attention to us or the worm. Time to change tactics.

The next lesson was choosing the right lure. We looked through our tackle box to find a baitfish lure. We found what we thought was the perfect one. It mimicked the small fish around the dock, and it was sure to entice this six pound bass. Again, we approached cautiously and presented the lure to the pond monster. Once again, it didn’t even flutter a fin as my plug wiggled past.

Lesson three was “matching the hatch”. Fly fisherman use this term to explain choosing the right fly based on what the fish is eating. We are a family of fly fisherman. My son knows how to tie a few flies and understands that we are smart enough to fool a fish with fur and feathers. We do not condescend to bait fishing. Fishing with worms and plugs was close enough. These family rules fly out the window when there is a seven pound bass taunting us at the end of the dock.

The “hatch” that afternoon was baitfish, and if we were going to catch that eight pound bass, we needed to catch a baitfish first. Using a worm, we shifted our focus from the biggest fish in the lake, to try and catch the smallest. Thankfully, I am an expert at catching tiny fish. After a couple minutes we had a small fish on a big hook and we set our sights on the humongous bass.

As our bait swam by, the nine pound bass opened her mouth and engulfed the fish. The fight was on. The other families around the lake were cheering as we fought the fish. It was a tough fight, but in short order, I had the fish’s lip and the crowd cheered as I lifted it out of the water. One spectator said, “This is the most sports I’ve watched in six weeks”

Returning the ten pound bass back into the pond was uneventful. It swam away as I taught my son the most valuable lesson of fishing. If you end up catching a five pound bass, it better be ten pounds by the end of the story. I quickly followed with the last lesson of the day, never believe a fisherman.