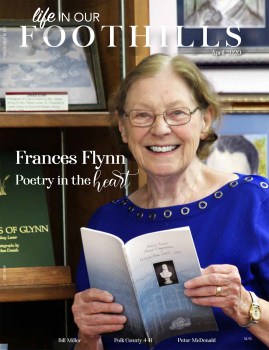 Poetry in the heart across countries and years

Written and photographed by Vincent Verrecchio

Bridges and houses, hedges and ditches…”

Eight-year-old Frances recited the poem in time with the rhythm of steel wheels clamoring across rail joints. To the initial amusement of the adults in the train compartment, her voice carried above the clickety-clack with assurance. Standing at the window, thin legs below the dress hem at her knees, a ghost of her face reflected in the glass with brown eyes looking outward. Brown braids danced along her cheeks to the beat of her words. It was beyond her imagination that she was in the beginning of a ride from England to a Poetry Festival in Tryon, 73 years in the future.

All through the meadows the horses and cattle…”

Beyond the pane, livestock grazed here and there, but no battles, no bombs exploding and no longer the fear of such, but her country was still shoveling out from the war.

“All of the sights of the hill and the plain

Fly as thick as driving rain…”

She knew all of the words of Robert Lewis Stevenson’s “From a Railway Carriage.” It was one of the 65 poems in “A Child’s Garden of Verses” that she had mostly memorized since receiving it when she was four. A gift from her grandmother, it was well thumbed and cherished and its memory would travel with her from London across decades and the sea. It’s now in the hands of her granddaughter.

To see the full version of Life in our Foothills in April click link below!

Life in our Foothills APRIL 2020