It Takes One to Hunt One

Tales of the Hunts
By Philip Hunt 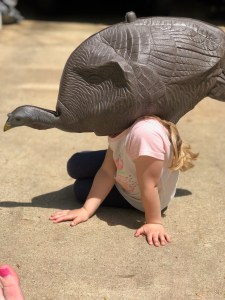 In the past two weeks, spring has sprung in a grand way. What were once green buds on trees are now leaves and our area was blessed with two inches of fresh pollen to cover our cars. Other signs of spring are absent. Community Easter egg hunts, crowded Easter morning church parking lots and the Master’s were all casualties of social distancing. One spring tradition has remained in our family this spring, Turkey hunting.
I know what you are thinking, it takes one to hunt one. You are right. I have never met a normal turkey hunter. I guess it is par for the course as the premise of turkey hunting is getting all dressed up and hoping a male turkey thinks you sound like a pretty hen turkey.
So far this season, every gobbler thought I was ugly. One in particular was just playing with my emotions. For forty-five minutes, I would channel my inner hen turkey and try to lure this Gobbler into a clearing. With every cluck and yelp he would gobble back with authority. Letting the whole forest know that he was the big bird in the woods. Unfortunately, he cared little for my emotions and ran off with another hen after our long conversation.
Heartbroken, I walked out of the woods ruminating on the fact that I was outsmarted by a bird with a brain the size of a Cheeto puff. Still, I couldn’t wait to get out to chase a Gobbler next time.
A Turkey gobble puts a target on a turkey. Two legged hunters aren’t the only ones that go towards the noisy bird for food. Four legged and winged animals also listen intently on spring mornings for the turkey to reveal their position. Coyotes and Great Horned Owls are two predators that love to have turkey on the menu.
Coyotes are now staples on our landscape whether we like it or not. The turkeys definitely do not like it. A Turkey’s flamboyant and vocal mating rituals in the spring might as well be a dinner bell for the coyote.
Turkeys roost, or sleep, in trees at night. Multiple turkeys will use the same tree. If there is a turkey that roosts alone, it is only logical that he snores.
The first gobbles of the morning are from the roosting tree. The turkey tells the world, specifically his hens, where he is so more turkeys can be made. But with each gobble in the early twilight, coyotes can triangulate their position for an easy breakfast when they fly down.
The Great Horned Owl doesn’t wait for the turkey to fly down. It attacks gobblers out of trees much like an unsuspecting quarterback gets blindsided by a blitzing linebacker. The only evidence of the attack is a trail of feathers that follow the glide path of the owl as it landed for some fresh turkey sausage.
Turkey hunters take many forms in the spring. Two-legged, four legged or winged. We have an ancient urge to chase a gobble in the newly green forests and fields. Some species are more successful than others. Thankfully, I know a guaranteed spot for turkeys in a refrigerated section of the grocery store.

Tales of the Hunts: The wonder of an Appalachian…