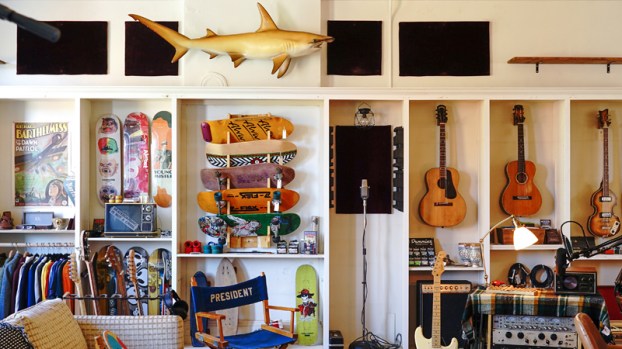 TRYON- A new couple to Tryon has decided to take their individual dreams and bring them together to host a store dedicated to both of them. Sabrina Heise and Stephen Fiore are the new co-owners of a vintage clothing store, music recording studio and skateboard shop.

The couple has been searching for a place that would house both of their passions for quite some time. Heise shared “Every time we would travel through Tryon it felt whimsical and magical.” Fiore followed with, “We realized once we found a house in Tryon after looking for quite some time this was the place that we would be able to make our dreams reality.”

Originally from Charlotte, Heise has always had a love for vintage clothing. She has known that opening a store dedicated to vintage clothing was an adventure she would love to go on someday.

The store is called Inherited. It features more than just vintage clothing from the 1890s to the 1990s. Shoppers will also find a selection of vintage home decor pieces and small, independent lines of jewelry, intimates, candles, perfumes and more.

Located in the back of the same building is where Fiore’s portion takes over. That’s where you will find the recording studio.

Fiore is originally from Summerville, SC but has spent much of his life living in Los Angeles as a music producer and musician with large music producing companies.

He has taken his passion for music and intertwined it with the vintage portion. It has been transformed into what feels like a retro, 1980’s recording studio. Titled “Young Mister” it’s a place for people to have the opportunity to purchase instrumental accessories.

On top of that, Fiore has a section dedicated to skateboarding.

Both Heise and Fiore commented they wanted the new space to feel comfortable for everyone, which is why they host annual music nights. At these events, musicians with diverse backgrounds from all over the country come to play. “It’s a night where people can come and enjoy some really good music,” says Heise.

Located at 25-A S. Trade Street in Tryon, Inherited is open from 11 a.m. to 6 p.m. Wednesday through Saturday.