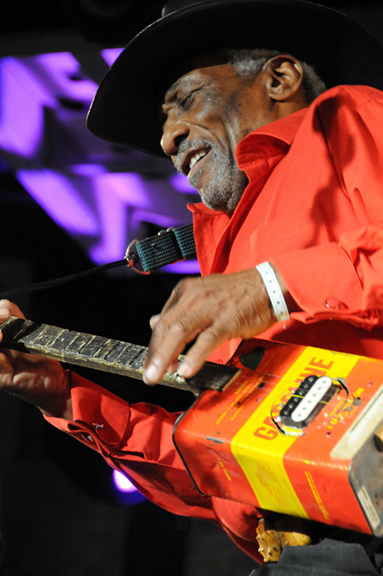 In late 1966, at age 24, Mac had the opportunity of a lifetime to join the Muddy Waters Band in Chicago to play bass and help shape the electric blues sound that inspired the rock ‘n roll movement of the late 60’s and early 70’s. Regular guests of the band included Eric Clapton, Paul Butterfield, Mike Bloomfield, and Elvin Bishop. The Muddy Waters Band (as a unit) shared the stage with the likes of Howlin’ Wolf, Elmore James, Jimmy Reed, Junior Wells, Big Joe Williams, and Big Mama Thornton just to name a few. Mac later moved to Los Angeles and produced Soul Train with his friend Don Cornelius. He even played bass on the Sanford & Son TV show.
Mac now has his own Chicago style blues band, Mac Arnold & Plate Full O’ Blues. Mac is one of the few remaining legendary old school blues men who puts on a stellar show. At 76 years old, Mac Arnold’s voice is absolutely amazing and his band is super tight. The band features Austin Brashier (lead guitar, vocals),  Max Hightower (keys, harp, vocals), Mac Arnold (bass, slide, gas can guitars, vocals) and a rotating list of hot drummers. Mac was inducted into the Alabama Blues Hall of Fame in September 2017. http://www.macarnold.com

All shows begin at 7 pm. In case of rain the concerts will move across the street inside the spacious Tryon Fire Dept.

This year’s expanded seven-concert series is presented by New View Reality of Tryon. The series’ co-producers are the Town of Tryon and Peter Eisenbrown.  Tryon Fine Arts Center is sponsoring this fourth concert.

Summer Tracks concerts are free, though a voluntary donation at the gate is encouraged. Audience donations along with the support of many local businesses and individuals make these shows possible.  Katie D’s N.Y. Bagels & Deli will be offering for sale a variety of slider sandwiches, hot dogs, wraps, chips and desserts. Water and soft drinks will be for sale plus alcohol consumption is allowed in the park but is not for sale.

For more information about Summer Tracks and the performers visit www.summertracks.com.

Summer Tracks 2019 Season brought to you by New View Realty of Tryon:

DO NOT become a victim of identity fraud or scams. The most popular phone call scam currently is the one where... read more