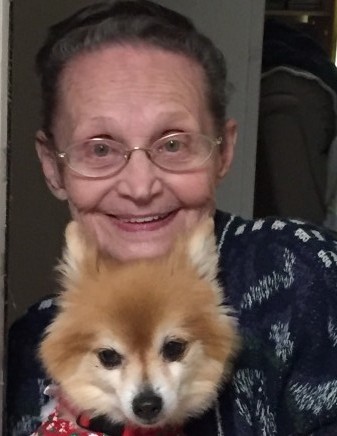 Donna Mae Daniel passed away on May 10 2019 at the age of 85. She was preceded in death by her parents Dale and Silvia Rouse and her husband of 60 years Gerrell Daniel. She is survived by her sister Shirley Williams (John) of Rockwell TX, brother Ron Rouse (Gail) of Rockville MD, and three daughters Sherrell Daniel of Claremore OK, Diane Cash (John) of Landrum SC, and Cindy Lou Daniel (Mark Hill) of Lexington NC. Also, she was preceded in death by a grandson Justin Cash and claimed grandma status for numerous staff members at Laurel Woods assisted living (Columbus NC) where she resided at her death.

Donna was born and raised in Newkirk OK. Throughout her life she wore many hats. As a teenager and young woman she was active in music and the visual arts. In 1952 she married her high school sweetheart, Gerrell. She worked in her parents grocery store, Dale’s Foodland, into the early 1970’s. When the store was sold, she worked on the family farm. In the late 1980’s and early 1990’s Donna collaborated with her daughter Cindy Lou in a  catering and wedding planning business. In 2007 Donna and Gerrell moved to Landrum SC to be closer to family.

Donna never wavered in what was most important to her; serving her Lord, her family and friends, and her fur babies, especially her beloved Pomeranian Melody. She was known for her engaging smile, spunky personality, generosity, and for ending almost every sentence with the phrase Amen, or God Bless You. She was much loved and will be greatly missed.

In lieu of flowers the family requests that donations be made to local Hospice chapters.

Mary Elizabeth Kelley Freeman (Betsy) passed into the next world on Mother’s Day, Sunday May 12, 2019. She was born... read more