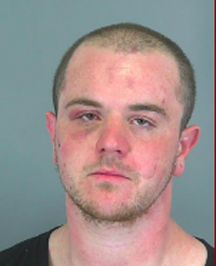 CAMPOBELLO—An Edneyville man sent Campobello, Landrum and Inman, S.C. officers on a police chase Monday night that ended with Campobello Police Chief Chad McNeil being struck by a vehicle in the leg.

James Adam Bass, 23, of Edneyville, was arrested and charged with three counts of high-and-aggravated assault and battery, possession of a weapon during a violent crime and failure to stop for blue lights, according to police reports.

McNeil said Bass wrecked and as officers were getting out of their cars, Bass backed up and hit him in the knee. The police chief said he has some scrapes and bruise but is fine.

The chase began at 8:44 p.m. Monday, when a Campobello officer attempted to stop Bass at the intersection of Highway 11 and Interstate 26 because of a defective headlight, according to the report.

Bass was driving a red Chevy Impala and did not stop. He pulled into a convenience store before continuing onto Highway 11 and turning on Compton Bridge Road towards Inman, S.C.

The chase went on several roads before striking a Campobello police car on Walnut Hill Road and then continuing to drive back to Highway 11. The chase continued to U.S. 176.

Bass left the highway at Old Mill Road, went to Millstone Drive and went through a cul-de-sac and several residential yards and returned to Old Mill Road, according to police reports.

Officers attempted stop sticks, which Bass drove over, before hitting a rock wall and coming to a stop while trying to turn back on Highway 11.

Besides striking Chief McNeil, Bass also hit two police cars. Cars surrounded Bass with officers giving Bass commands to get out of the vehicle, which he ignored, so officers physically removed him from the vehicle.

As of Wednesday, Bass was still being held in the Spartanburg County Detention Center.