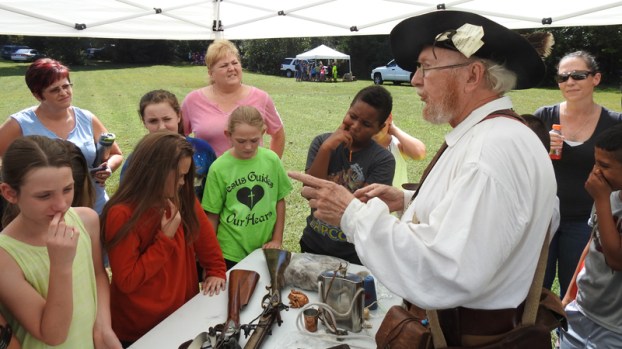 Ever wonder how the pioneers cooked meals over the open fire, made tools, used weapons, forged knives, hatches, and nails, made cloth from raw fibers, survived in the elements, and made a fire when there were no matches? Reenactors from the Overmountain Victory Trail Association and the Polk County History Museum will show you how these and other skills were perfected back in the 1780s when the original Overmountain men marched through the county en route to Kings Mountain.

“The Overmountain men were immensely popular when they to appeared here “At a Night at the Museum,” said Pat McCool, president of the Polk County Historical Association. “People wanted to see more of them, so, we are inviting them back on Saturday, May 4, for a day–long demonstration.”

The Revolution War Days exposition will be held in the vacant lot adjacent to the Museum in downtown Columbus and run from10 am until 4 pm. Also, the wives of the frontier reenactors will show how women did their daily chores while helping the men fight off Indians and Tories.

“Unlike the earlier visits, each demonstration station will be much time they to present their each their skills and talk about life in the old days,” said Tom Vaughan of Bristol, Tennessee. “With us will be Steve Ricker, who will talk about how the Overmountain warriors used their frontier skills when they furnished their own weapons, horses, and lived off the land when called upon to chase the British out of western North Carolina. The trek to Kings Mountain runs from Abingdon, Virginia, through Polk County.”

R.G. Asher will entertain folks with musical instruments that were common 240 years ago. Other reenactors come from Fort Davison at Old Fort, NC. and demonstrate how children made their own toys back then. Cavalry reenactor Edward Harrelson with other riders will demonstrate horsemanship in the 18th century.

This will be the Polk County History Museum’s first all-day commemoration of the Revolutionary War.  Visitors are urged to come Rev War days from 10 am until 4 pm. The Museum is open Tuesday, Thursday and Saturday.

Morris the Tryon Horse has proudly represented Tryon since 1928. He is both a symbol of the community’s love of... read more