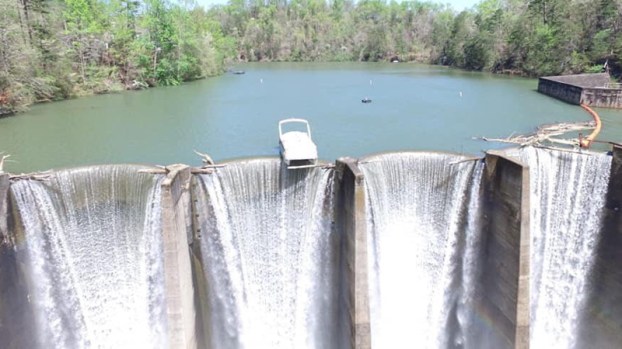 Pontoon got loose during Sunday storms; levels too high to retrieve until Tuesday

Polk County Emergency Manager Bobby Arledge said late Monday that his office was aware of the pontoon boat partially hanging off the dam but due to conditions, they were unable to remove it. The boat was towed off the Turner Shoals Dam around 10 a.m. Tuesday.

Conditions were too dangerous to remove the boat Monday. The boat is believed to have gotten loose and floated to the dam sometime Sunday evening.

Arledge also said they knew no one was on the boat so there was no immediate threat to life.

“We are going to reevaluate the situation (Tuesday morning) to see if the lake levels are low enough for us to get close enough to remove it,” he said.

Storms on Sunday created high winds and the Tryon area received 1.65 inches of rain, according to the National Weather Service.

A funnel cloud was reported on Hooker Road, between Tryon and Columbus Sunday evening, and some residents lost power Sunday night.

Monday afternoon also caused issues in the area when a tree fell on Highway 9 knocking out power lines and causing a small fire.

By daylight Monday morning, North Carolina Wildlife Resources Commission’s Toby Jenkins said his office began getting calls about the pontoon boat resting on the Turner Shoals Dam. Jenkins reported that the owners of the boat have a house on Lake Adger and thought they had it tied securely, but the storms broke it loose.

The winds at Lake Adger on Monday were about 20 mph and the water levels were high, so it was too dangerous to retrieve the boat when it was initially reported.

Crews used another boat to tow the pontoon boat back to its owners Tuesday morning.

The Lake Adger dam operator drew the lake down on Monday to help improve conditions.