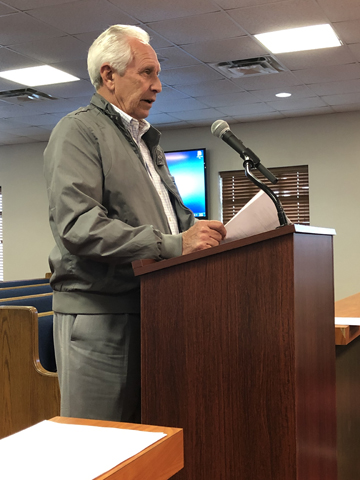 Former commissioner says Polk should get rid of Lake Adger

COLUMBUS—A former Polk County Commissioner spoke this week saying he would rather his tax dollars go towards the school system than towards the Lake Adger Dam.

The Polk County Board of Commissioners met Monday and heard from Keith Holbert, who is a former county commissioner.

Holbert stood during citizen comments and said he recently noticed in the Bulletin that Polk County has about eight teacher positions being removed. He said some of the positions are in math and science.

Holbert said one position solution to this would be to realign spending.

“Or we could create a special tax district for the residents of Lake Adger since they benefit,” he said. “I, for one, had rather my tax dollars go to the schools than to a dam.”

Polk County has considered selling Lake Adger in recent years, but no one has been interested in purchasing the lake. In 2008, Polk County purchased Lake Adger for $1.6 million for a future water source. Since, the county has discovered the Turner Shoals Dam is in need of repair, with the most recent estimates being $2.75 million over the next couple of years. The county has saved about $1 million for dam repairs over the last several years.

The county had the lake appraised in order to sell it in 2016, with the appraisal being that it is worth an estimated $5.1 million.

The county was in negotiations for about a year a few years ago with the Inman-Campobello Water District for ICWD to use the lake and make repairs to the Turner Shoals Dam. After many negotiations, that deal fell through.

Commissioners did not discuss Holbert’s comments on Monday. The Polk County School system announced last month that declining revenues will likely mean the loss of up to eight positions across the school system in the 2019-2020 fiscal year.

The possible reduction in positions is because of state and federal budget cuts, increases in costs for personnel and operations, slight decline in student enrollment and a shrinking fund balance, according to school personnel.

Landrum could be getting a new strip mall