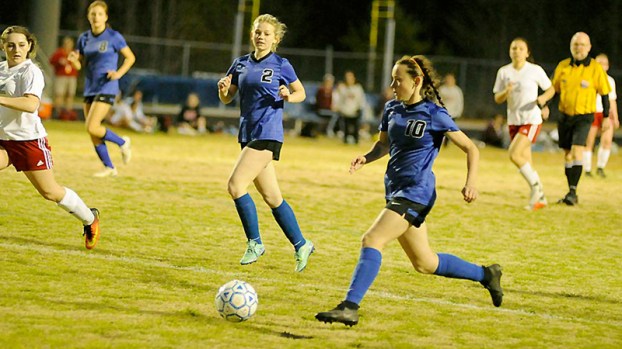 Polk County's Caelan Gaul scored a pair of goals, one in each half, in Thursday's win

Polk cranks up intensity, offense to romp past Avery

Whatever the reason, a Vikings team still searching for its first win kept pace with the Wolverines for the first 30 minutes of Thursday’s Western Highlands Conference match.

The final 50, though, all belonged to Polk County, with the Wolverines steadily pulling away for an 8-0 win in G.M. Tennant Stadium.

Polk County (4-1-3, 2-0) got a hat trick from Reese Alley for the second straight match and Caelan Gaul and Belen Akers each scored twice as the Wolverines turned a tight match into a second straight eight-goal victory.

“It was a slow start,” Charles said. “Maybe you can put that down to me telling them before the match that we should be the better team and we were not as intense as we needed to be”

Alley scored in the eighth minute, but Avery (0-8, 0-3) preserved that one-goal deficit for the next 23, with goalkeeper Marisol Guzman making a number of saves, including stopping three point-blank shots.

But Polk began to solve Avery’s defensive approach and tallied late in the half as Gaul raced down the left side and rocketed in a shot in the 31st minute to give the Wolverines a 2-0 lead at the break.

With Avery looking to slow down Polk’s attack by pushing defenders upfield, the Wolverines began sending long passes through those defenders, allowing strikers to race past and set up breakaways.

That strategy unleased a torrent of second-half goals for Polk, with Alley scoring twice in the first 2:15 of the half. Goals followed at regular intervals, with Gaul getting another, Akers scoring her two and Sydney Waldman capping the scoring with a tally in the 78th minute.

“Once everybody figured out what they were supposed to be doing, the floodgated opened up,” Charles said.