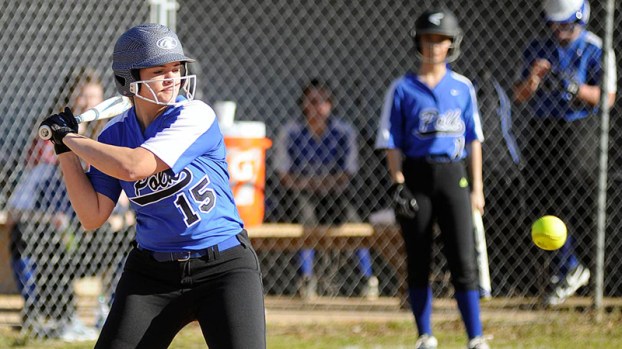 Down, but never out, Polk erases deficit to stun Owen

Grayer than the cold afternoon sky Tuesday was the collective look on the faces of Polk County’s softball players an inning and a half into their matchup with Owen.

A stunning start might not fully convey the opening salvo the Warhorses delivered. Owen scored eight runs in the first inning, then added three more to own an 11-1 lead as the bottom of the second approached.

“I told them we had scored 11 runs in a game before,” he said. “We had two choices. We could stick out lips out and mope around, or we could bow our necks and stick out our chins and claw back into it.

“And that’s what they did.”

The Wolverines halved the deficit in the bottom of the second, finally caught the Warhorses in the fifth and went on to claim a 15-12 victory in a Western Highlands Conference matchup.

A win that seemed improbable could prove to be one more than memorable, Thompson hopes.

“I told them that if this isn’t a defining moment, I don’t know what is,” he said.

The pitching of Anna Hodge helped turn the tide. On in relief with one out in the second inning, Hodge allowed just one run in her five and two-thirds innings of work. She only allowed one hit in the final four innings, keeping Owen in check as Polk’s rally commenced.

The Wolverines (4-4, 3-2) began that comeback in the second thanks to Ansley Lynch’s two-run double and Alana Jergenson’s three-run homer. The momentum continued to shift in the third as Lynch’s three-run homer highlighted a four-run inning and cut Owen’s lead to 12-10.

It stayed that way until the fifth, when Emily Prince drew a leadoff walk, with pinch runner Kaylin Jenkins moving to second on a passed ball. Anna McFadden drew a walk, and Morgan Stott’s single loaded the bases.

Lynch’s infield grounder scored one run, and Jergenson followed with a sacrifice fly to bring in another and even the game at 12-12.

Polk then pushed across three runs in the bottom of the sixth to take the lead and, eventually, the win.

“Ansley and Alana had their first home runs of the season. They’re batting three and four for a reason,” Thompson said. “Everybody had an at-bat that meant something.

“Anna Hodge did a great job coming in and stopping the bleeding. It was a total team effort, picking each other up.”

Lynch finished 2-for-5 with six RBI, with Stott going 2-for-4 with an RBI and Jergenson going 1-for-2 with four RBI. Allie Thompson added a 1-for-2 effort and scored three runs.

The Wolverines travel Wednesday to Pisgah for a non-conference matchup.